With media consumption habits on the increase during the Covid-19 crisis, Richard Colwell of Red C makes the case for increased advertising if brands want to reap dividends and captivate audiences.

New research from RED C shows that spending on marketing and communications during the Covid-19 Crisis makes strong commercial sense.

We started the shutdown advising on the benefit for brands to keep talking during a time of recession.  There was plenty of evidence to underpin that advice, including the past experiences of brands that stopped advertising during the Global Financial Crisis, the advice of some of the best in the business to invest in brand building, and the fact that our own RED C advertising evaluation was showing consumers were open to appropriate messaging.

For the past four weeks, RED C has been running a weekly syndicated survey for clients to understand consumer impact of COVID-19.  More recently, we included a series of questions to measure media consumption and results from this clearly demonstrate the degree to which consumers are tuning in to media more than ever. The surge is seen across the board, providing compelling evidence that now is the time for brands to reach consumers.

The greatest increases are seen for consumption of Live TV (64%) and general online browsing (66%), with almost a third of all adults suggesting they are consuming “a lot more” of both media. 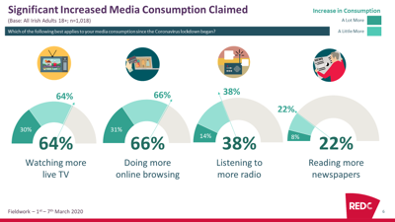 But the increase isn’t just focused on those mediums where we might have expected some gains.  Increases in consumption are also seen, albeit to a lesser extent, for both radio listenership (38%) and even physical newspaper readership (22%). 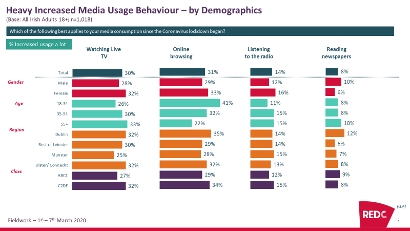 The Thirst for News Driving Consumption

The consumer thirst for news coverage is the most important driver of this increase in consumption, consumers clearly show a hunger for the facts and certainty that the News gives them, in a time of never greater uncertainty

Three quarters (74%) of all adults claim to be watching more news and current affairs programmes on TV, while two thirds (64%) say they are visiting more online news sites. 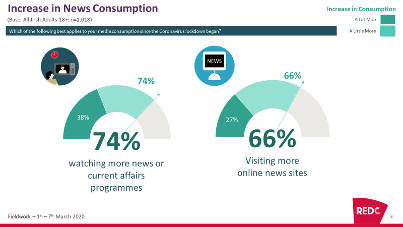 Increases are seen for both sources of news across all demographic cohorts.  A slightly higher proportion of older consumers are seen to be watching more live news and current affairs, while younger consumers are somewhat more likely to be seeking more news through online sites. 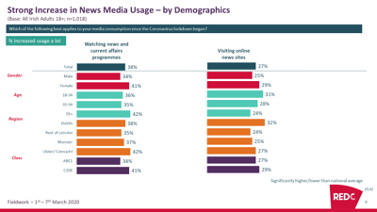 The fact that news is driving increased media consumption should not put off brands looking to advertise.

As covered in our last article, a recent study by Lumen Research in the UK has shown that attention to both digital and print advertising surrounding news coverage is even higher than usual during the outbreak.   They used eye tracking to demonstrate that print advertising in newspapers is seeing a 21% increase in attention vs. the norm, while there was an 11% increase in viewing digital ads on news sites vs the norm.

The final factor that should encourage brands to advertise at the moment, is that news isn’t the only factor driving increased consumption.

A secondary and important factor is the desire seen among consumers to “escape” from the crisis and the lockdown that we’re all experiencing.  Over exposure to news and current affairs can heighten fear and anxiety, leading consumers to seek light relief from other TV programmes and on demand services.

The significant increase in streamed TV consumption in this report (53% suggesting they are doing more and 27% a lot more) suggests that the overall surge in media consumption is not just about finding out about news, but is also driven by the need to be entertained, and at times somewhat removed from the news cycle. 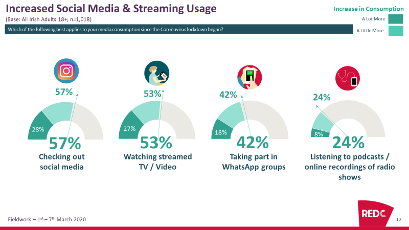 The growing sense of isolation is causing ever increasing numbers to also seek solace and humour from social media and WhatsApp groups.  We see claimed increases in social media usage, podcast usage and WhatsApp group participation.  While these claimed increased are more prevalent among younger consumers, some gains are seen across demographic groups. 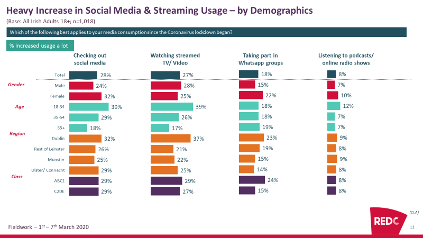 The claimed increases in media consumption, across such a variety of media channels, provides further weight to the argument that investing in advertising now will reap dividends for those brands that do so.

RED C recommends to brands, that now is the time to advertise to a captive audience and reap rewards once society moves away from lock down.