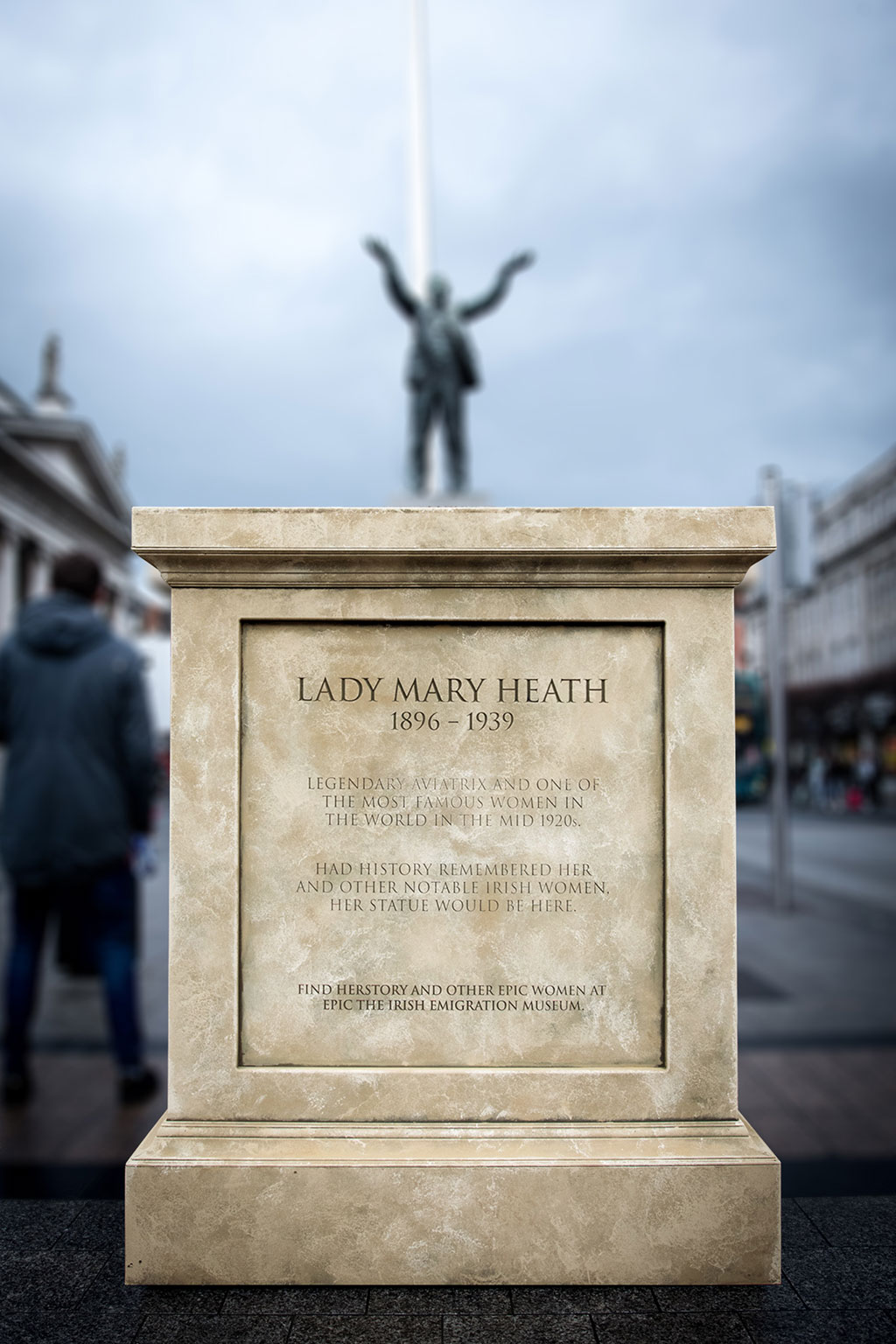 Creative agency The Public House has today launched a campaign for EPIC  The Irish Emigration Museum, which challenges people to reflect on how women have been omitted from Irish history.

They have placed an unmissable plinth in the middle of O’Connell Street, Dublin’s main thoroughfare lined with monuments of the country’s most prolific statesmen. This plinth, in stark contrast to its neighbouring statues, stands empty – highlighting the many Irish women who have been overlooked by history.
While there are 48 statues in Dublin city centre celebrating Irishmen who have made history, there are only six statue artworks dedicated to five Irish women; Constance Marckievicz is remembered in two.

This initiative supports the wider work EPIC are doing to highlight the impact of Irish women. A temporary exhibition called Blazing a Trail: Lives and Legacies of Irish Diaspora Women, running until March 31st, presents the legacies of 21 pioneering Irish diaspora women of the 19th and 20th centuries from a wide range of fields. Their stories can be found on www.epicchq.com/herstory.

In addition, EPIC have supported the making of the ground-breaking documentary Herstory: Ireland’s EPIC Women by Underground Films, with RTÉ, the BAI and Herstory. See www.rte.ie/herstory for more details.

“This activation is about showing people that there is an omission of women from history books, curricula and public monuments in our cities and towns. It is a large part of why projects like RTE’s Herstory: Ireland’s EPIC Women and exhibitions dedicated to the achievements of women, such as EPIC’s own Blazing A Trail are so vital” says Patrick Greene, CEO and Museum Director of EPIC.

Catriona Campbell, Managing Director of The Public House, said: “We’re extremely proud of this work, and relish the the opportunity to challenge peoples’ perceptions of history. This campaign shines a light on the many women who have done countless things for our country, but have been completely overlooked thus far. The idea is simple but has a strong, clear message which resonates with today’s society”.

As well as the launch activation, the campaign will be further amplified through social, posters on Irish Rail and press insertions.

EPIC The Irish Emigration Museum is an interactive journey that details how the small island of Ireland has had such a big impact on the world. It shares the lives and stories of women and men not commonly found in history books.

The Public House is a full service agency with clients including FBD, Independent and EPIC The Irish Emigration Museum.