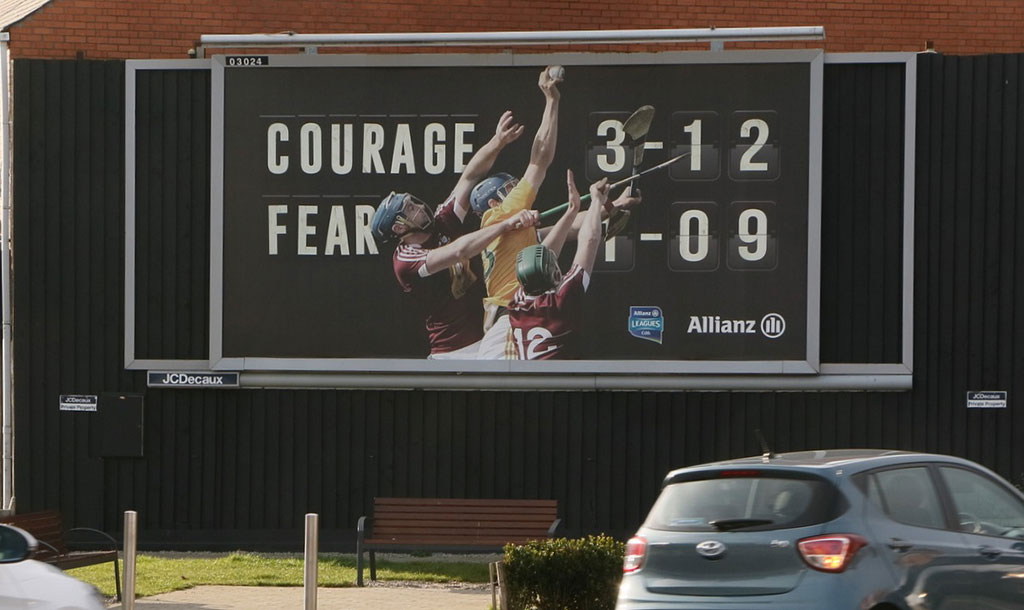 OOH specialist Kinetic teamed up with insurer Allianz Ireland to produce the next instalment in their “We Cover Courage” campaign: Courage vs Fear.

Working closely with MediaCom and creative agency In the Company of Huskies, the team have devised an OOH ‘tease and reveal’ campaign to mark the 28th year of the Irish insurer’s sponsorship of the Allianz Leagues.

To drive awareness of the launch of the 2020 Allianz Leagues, Allianz chose to run a teaser campaign during the hiatus between the intercounty Allianz Ireland Championship and the start of the Allianz Leagues. The tease creative featured a scoreboard which showed ‘Courage and Fear’ with the scores set at nil all.  Location was key to resonating with key audiences and for this reason the OOH campaign was planned for counties where GAA players are from – Carlow, Laois and Westmeath and focused on key areas of interest by targeting GAA clubs.

According to Susan Murtagh, account director at Kinetic: “Kinetic are delighted to be working with Mediacom and Allianz Ireland on the new GAA sponsorship campaign. We wanted to create some talk-ability around the sponsorship and a teaser campaign is the perfect way to do this. We know 47% of people agree that billboards leave a memorable and emotional impact, so this was the perfect channel for this message.”

The reveal element of the campaign leverages imagery from the Allianz Football and Hurling Leagues, with the scoreboard showing Courage winning over Fear.  The OOH campaign is part of an integrated media strategy what depicts scenarios such as a first kiss, a piano recital and school children playing a GAA match, all moments in everyday life where courage and fear have a chance to influence our actions.  Allianz’s support of GAA spans almost three decades and Allianz believe that GAA players at all levels, from those playing Allianz Cumann na mBunscol right through to Allianz Leagues, embody all that can be achieved through commitment and courage.

According to Rob McEvoy, head of market management at Allianz Ireland: “By using a GAA scoreboard as the central creative to our OOH campaign, we knew that this would resonate with GAA fans.. It generates intrigue and creates a sense of curiosity even though they wouldn’t have known which brand it was for. We have worked very closely with both Kinetic and Mediacom on this exciting campaign.”

The billboard teaser element has been complemented by a multi-format reveal campaign using 6 sheets, transport and DOOH formats in a range of locations across the country and is fully integrated with the television creative, continuing to leverage the strong visual of the scoreboard.