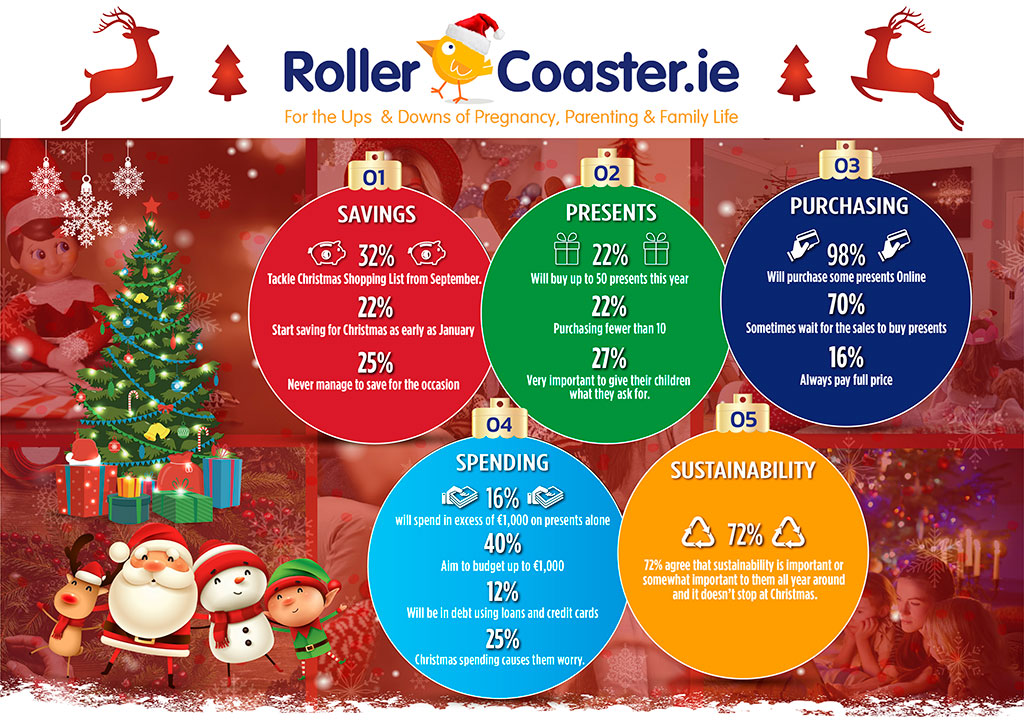 With Christmas only weeks away, new research carried out by the DMG Media Ireland-owned brand Rollercoaster.ie reveals that a staggering 1 in 8 respondents to a survey confessed that Christmas will leave them in debt as they make their way through the festive season with loans and credit cards. In addition, some 25% of respondents said Christmas spending causes them worry.

When asked about expenditure, almost 1 in 4 (22%) of those questioned showed themselves to be long term financial planners putting money aside for the festive season as early as January while exactly a quarter admitted that they never manage to save for the occasion. The figures indicate that approximately 1 in 6 of those surveyed (16%) plan to spend in excess of €1000 this Christmas on presents alone while an average of 40% aim to budget up to €1000 to cover gifting and groceries combined. The vast majority (70%) of those questioned conceded that they do sometimes wait for sales to buy their Christmas presents with almost one fifth (16%) revealing that they always pay full price

The research also shows that one-third of respondents admitted to tackling their Christmas shopping list from September onwards with 1 in 16 revealing that they get a jump-start even before the summer. Almost a quarter (22%) of those surveyed disclosed that they anticipate having to buy up to 50 presents this year while interestingly the same portion intends on purchasing fewer than 10 in total. Unsurprisingly, the convenience of online shopping is on the rise with 98% revealing that they do some if not all of their Christmas shopping through online stores.

When asked about fulfilling their children’s wish list this Christmas, over a tenth (11%) stated that it was not really important for them to get their kids what they ask for. However, the research did display that environmental impact was high on Irish shoppers agendas with more than 1 in 7 agreeing that, to some degree, sustainability was important to them all year round not just at Christmas.

According to Miriam Burke, content and community editor of RollerCoaster.ie: “The RollerCoaster parent is the Irish parent. This survey shows that families all around the country have varying priorities when it comes to Christmas spending, but the number of presents they buy or how much or little they save or spend doesn’t distract from the fact that Christmas is an enormously important part of family life in Ireland.”