With the number of new car registrations in 2019 down by 7% in the first ten months of 2019, Carzone, the Irish car buying portal has released details of new research that examines the modern car-buying journey of the Irish consumer.

The research finds that consumers are open to influence further into the car buying process than previously thought, presenting opportunities for retailers and manufacturers alike.

This Car Buyers Report is a comprehensive study into the car buying process and involved research among over 250 people who were actively looking to purchase a car or who had purchased a car in the past six months. The report uncovers the six key stages to purchasing a car: Contemplation, Triggers, Consideration, Preferences, Decision and Doing the Deal. The shift from the previous linear model to today’s situation is due to the wealth of information and outside influences available to consumers, meaning the journey can be a long and sometimes frustrating one for both buyer and seller.

According to the research, all car buying begins with contemplation and consumers will be sub-consciously influenced by numerous factors. Contemplation (Stage One), can take a long time with 44% of those currently on the car buying journey spending several months at this stage. Car buyers who have yet to buy a car feel it will take a lot of time, effort and stress (45%), while those who have recently bought think otherwise (39%), indicating that the process is easier than most expect.

The research shows that a quarter (25%) of recent buyers did not plan to purchase a vehicle and did so due to unforeseen circumstances, such as an accident or breakdown. Other reasons cited for purchasing a new or used car include change of circumstance, like a growing family, or a planned choice, for example wanting something new. These all fall under the Triggers stage. The report finds that nearly half (49%) of car buyers consider buying a brand-new car but only 36% actually follow through on this, showing that car buyers can be aspirational during this early part of the journey.

The Car Buyers Report reveals that Irish consumers take their time when in the Consideration phase (Stage Three), with 50% of buyers who bought in the last six months spending up to a month researching, while one in five (20%) took a month or more.

During this phase car buyers are open to recommendations, the majority preferring to get advice from people they know (83%) and half say they get recommendations online (50%). Other sources of information and recommendations include dealers (39%) and manufacturers (25%). 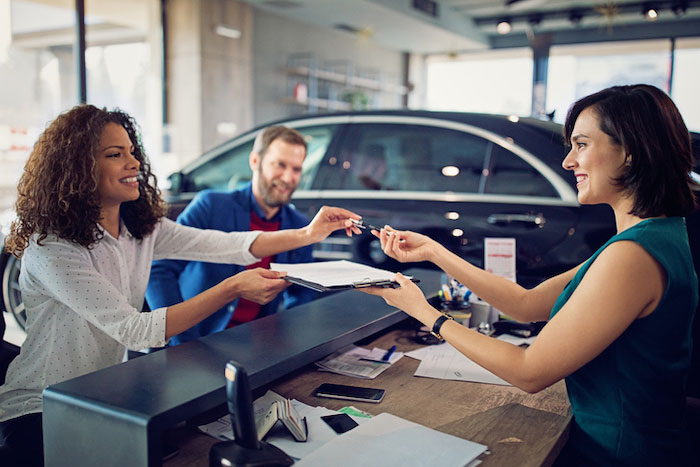 The report shows that a piece of new information, for example a recommendation or advertisement, can result in a car buyer going back a number of steps in the process, even at this later stage. It finds that car buyers can change their mind about the car brand (94%) and model (92%) as late into the process as Stage Four, the Preference stage.

Half of buyers are still deciding on whether they will purchase a new or used car at this stage (50%), as well as altering the budget they are willing to commit (85%) and how they are going to finance the car (65%).

Following Stage Four, the buyer will now have a firm idea of what they want and it is during the Decision stage (Stage Five) that consumers will visit a number of dealerships or private sellers to examine cars in person and test drive the cars. During this stage, buyers are still open to influence, so it’s important consumers are provided with the best experience possible.

The Carzone Car Buyers Report shows that feelings are mixed about car dealerships. Over a third (36%) are reluctant to visit a car dealership and only 5% say they trust all car dealers. According to the study, reputable car dealers are determined by several factors including good reviews, quality of the stock, transparent pricing and friendly staff. Dealers and private sellers need to keep in mind that everything can change within a day and the buyer’s experience can make or break the deal – for 66% of car buyers it still takes more than a day to make a final decision.

When it comes to Doing the Deal (Stage Six), nearly half of buyers (49%) spend a day or more after buying reflecting on their decision. For many buyers they have reached a point of fatigue and go for the car that is good enough rather than the best car and deal for them.

According to Karl Connolly, Audience Manager at Carzone: “The results from this report are fascinating and offer an accurate look at how the Irish car buying journey has evolved. The report provides insights on how consumers go about researching car brands and retrieving recommendations, to how long it takes a car buyer to make their final purchase decision.”

He adds: “It is clear from the report that there is a huge amount of uncertainty amongst consumers, which means that the need for trust is greater than ever. Dealers can build this trust by being transparent with customers and ensuring that consumers feel that what they see is what they get. This information provides a great opportunity for dealers and private sellers to meet customers’ needs while ensuring they drive away in the best car for them.”