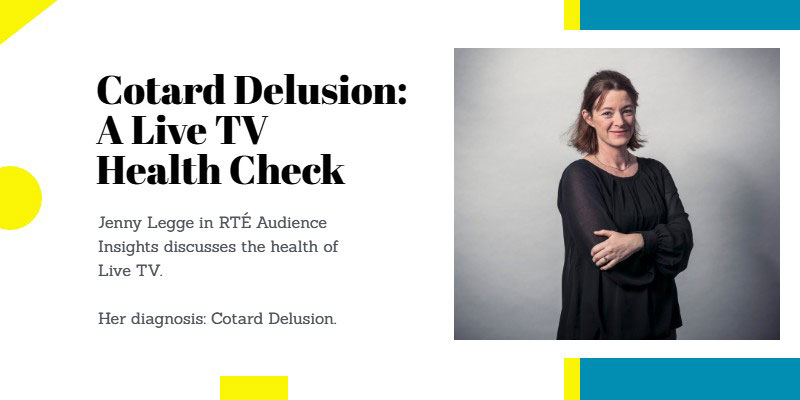 Cotard delusion, also known as Cotard’s syndrome, is a rare mental disorder in which the affected person holds the delusional belief that they are already dead. The cure? Read on… says Jennifer Legge.

How many times have we heard the sweeping diagnosis, “Live TV is dead”? Often enough to cause some in the industry to refer to this diagnosis as delusion, or Cotard’s Delusion!

As a cure we offer the following consultation: Live TV viewing accounts for over two and a half hours of an adult’s time. Every. Single. Day. That’s a lot longer than your lunch break, which we’re sure isn’t dead; longer than your short hop flight to London, Paris or Barcelona which we hope isn’t dead and significantly longer than it takes to commute in and out of work now that schools are off. Long live summer holidays!

Live TV viewing accounts for a big chunk of all AV viewing. We know that it’s about 65% among Adults 15+ which equates to approximately 152 minutes per adult every day! 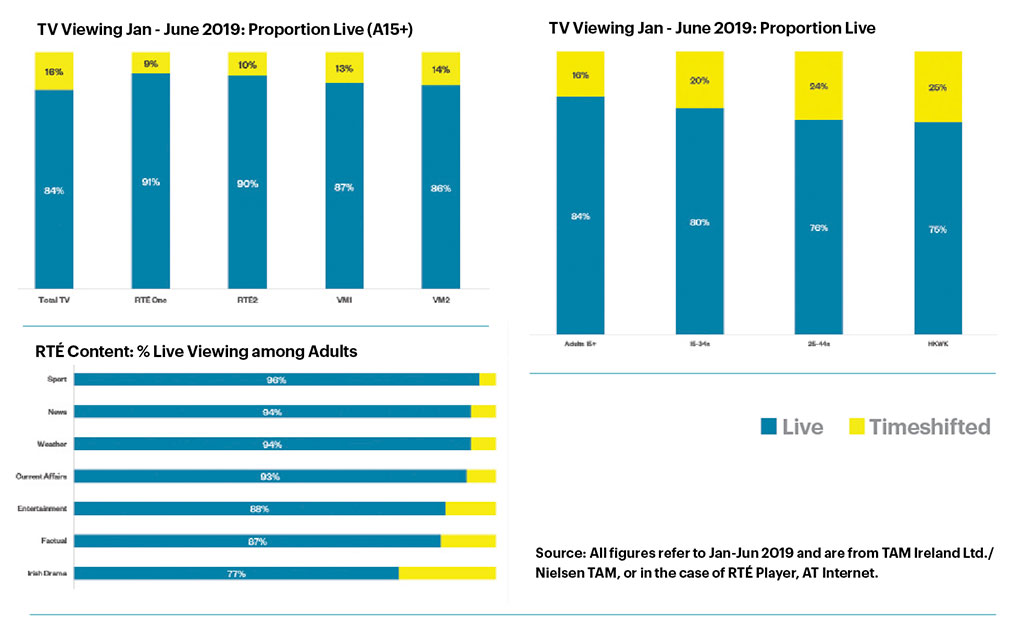 Take drama on BBC. Their popular Line of Duty was time-shifted to the tune of 57%. In other words, over half of those watching Line of Duty watched it after it started broadcasting. In some cases, this may have only been an hour or two later; certainly, most viewing would have happened within a day or two. Channel 4’s popular Derry Girls was also a massive time-shifted hit – 82% of it was watched after initial transmission. And on RTÉ One, 23% of its 2019 flagship drama, Resistance was time-shifted.

Meanwhile sport and programmes such as news, current affairs and entertainment are much more likely to be viewed live. It makes sense – people have different needs when they’re watching this type of content and these needs best align themselves with live viewing or watching events with others as they’re unfolding.

If we look at the proportion of live viewing among different age groups, distinct patterns also emerge.  In short, under 45s time-shift more than over 45s. However, the trend is not as pronounced as people might think. Three years ago, the average 15-34 year-old watched 85% of their TV content live and now they watch 80% – hardly a seismic change.

So, what are the implications of all this on commercial impacts?

Well in the case of BBC absolutely none!  For other channels it is of course preferable for programmes to be viewed live – and here RTÉ scores, in part because its breaks are shorter, hence less clutter and therefore less fast forwarding.

However, it would be wrong to presume that time-shifted advertising is not watched. Even when programmes are pre-recorded, a significant proportion of ads are viewed in normal speed. For example, The Handmaid’s Tale is currently airing on RTÉ2. Being a drama, and one which appeals to younger audiences, lots of time-shifting is taking place. In fact, 69% of 15-34s viewing of the first 5 episodes was time-shifted. Nevertheless, 32% of 15-34 impacts delivered by The Handmaid’s Tale occurred in the time-shift window. And as the bulk of this catch-up viewing is happening within a couple of days of original broadcast these ads are still very relevant.

The Handmaid’s Tale is not an isolated example. Back to Derry Girls where 82% of its viewing occurred after its broadcast. In this case, 50% of Derry Girls impacts came from time-shifting.

And of course, not forgetting BVOD. RTÉ Player provides incremental reach, particularly among 15-34s and 25-44s. While catch-up continues to grow, we’ve also seen an increase in live viewing which now accounts for 33% of all RTÉ Player viewing.

So in short, live TV viewing is in good health despite many technological advances. And medically, it’s time to assign Cotard’s Delusion back to the textbooks.