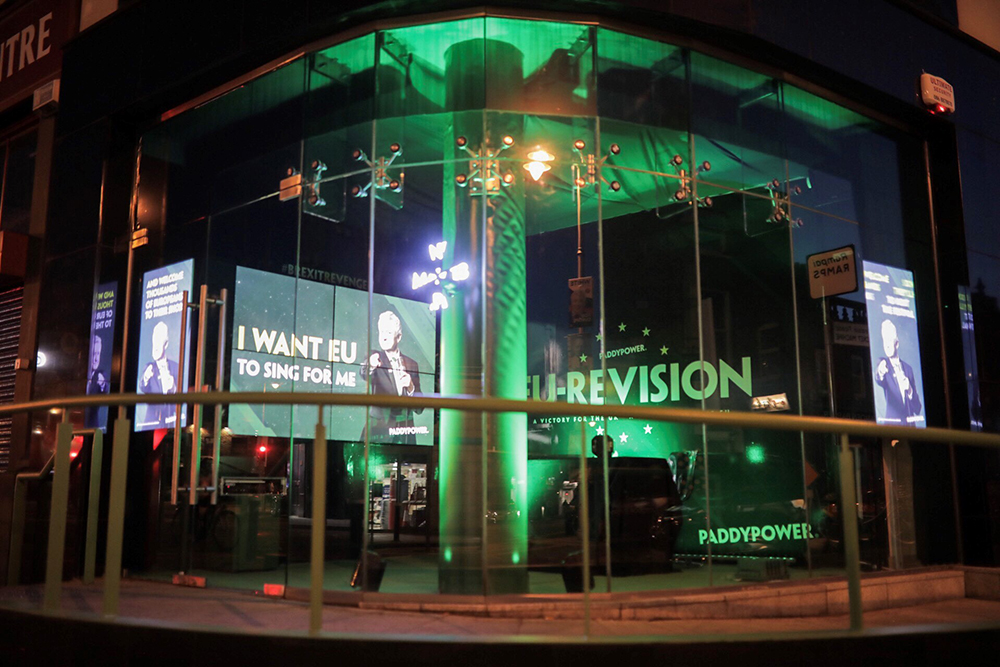 With the Eurovision Song Contest underway that weekend, Kinetic has teamed up with Paddy Power OMD Ireland and Micromedia  to launch a light-hearted OOH campaign that involves an innovative Pop-Up Shop on Dublin’s Camden Street that was decorated with bespoke banners featuring ‘national treasure and ambassador for the EU-Revision project Louis Walsh.

The campaign calls on Eurovision fans to unite in one voice and vote for the UK to win this year’s Eurovision. Success of the campaign would see the UK crowned as the champions and force them to host the competition and its European attendees in 2020.

According to Brian Nolan, Account Director at Kinetic: “Kinetic are delighted to be working alongside Paddy Power in this exciting four-day campaign. The use of building wraps is a key component of contemporary OOH campaigns and when presented in commuter areas the reach of ads is greatly increased. Paddy Power is renowned for their innovative and eye-catching campaigns and the coverage gained from the campaign is a testament to the position that Paddy Power holds in the Irish market. We look forward to working with them again in the near future.”

To mark the occasion, former X-Factor Judge Louis Walsh hosted a contest in Camden Corner to whip up some #BrexitRevenge and select the winner of a VIP trip for two guests to a private screening of the Eurovision.

Orla Cleary at Paddy Power says: ‘To be honest with you, this was just an excuse to stick a massive picture of Louis Walsh in the middle of Dublin, as if it were my bedroom walls in the 1990s. Our EU-Revision campaign with Louis was mischievous, eye-catching and larger than life – so our OOH strategy had to mirror all of those things. And it did, with a Paddy Power first execution, and some good old-fashioned karaoke…’