Over 80% of Workers are not Hybrid – a view from OOH. Sophie Hamilton, marketing executive, PML Group with this week’s Out \ Look.

Over 80% of Workers are not Hybrid.

ESRI’s latest Social Activity Measure – which is based on data collected during the week to April 26th reports on developments in working and commuting. This analysis relies on all workers in the last three waves of SAM, giving a sample size of 1,983. 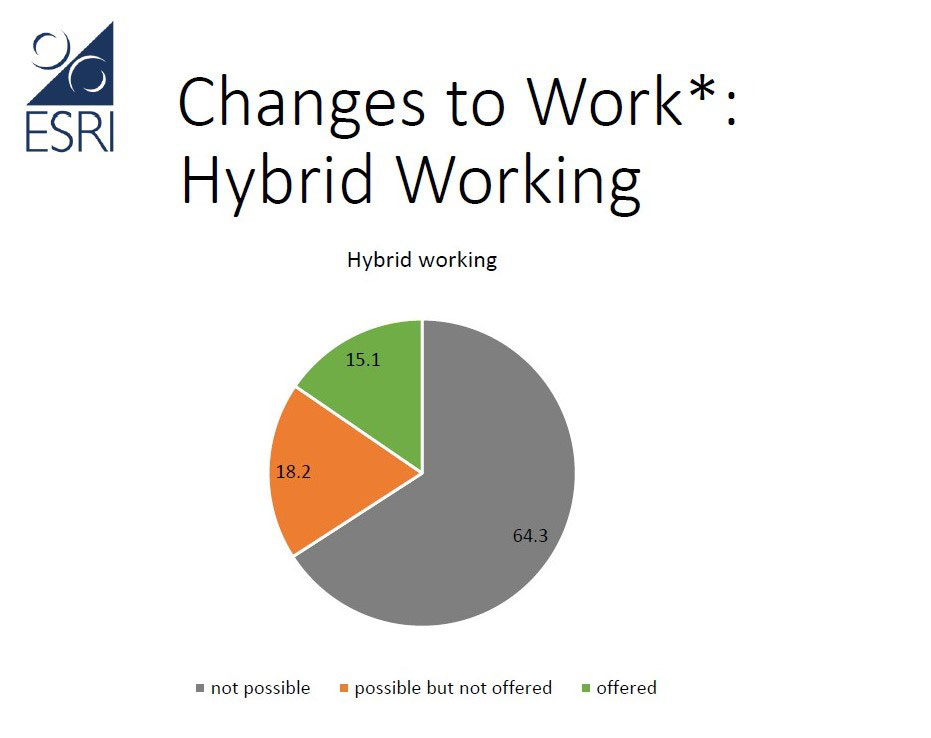 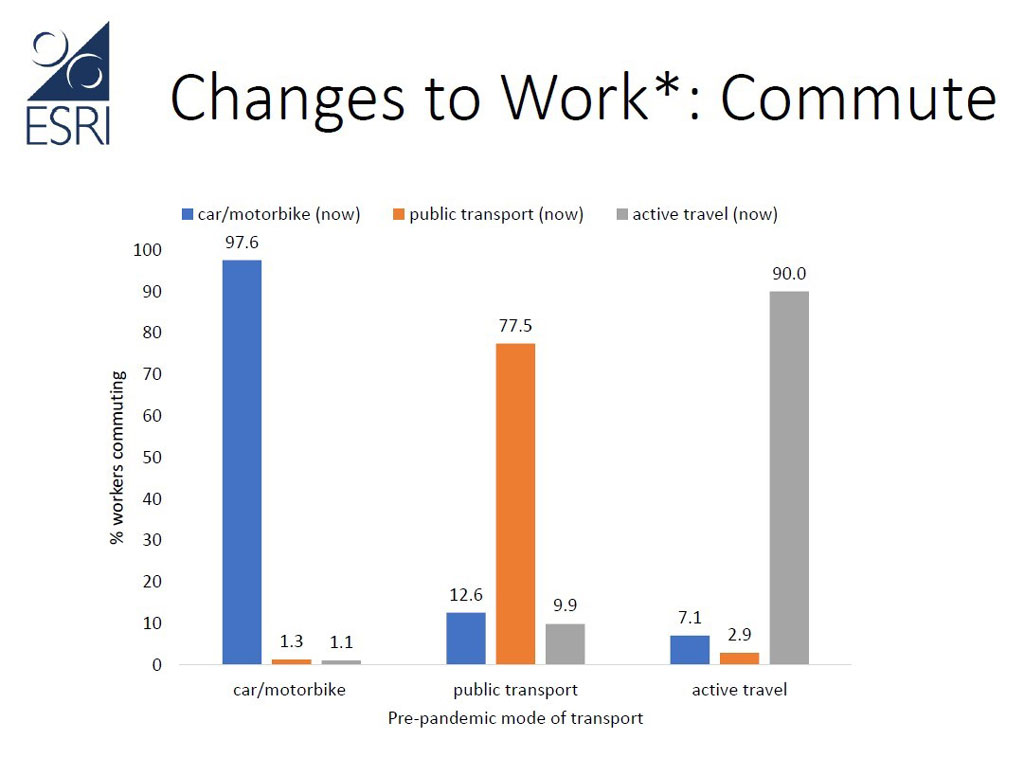 This chart shows main modes of transport for work commutes pre-pandemic and now, among workers who work at the same place they did before the pandemic. The vast majority who commuted by car or active travel (walk/cycle) before the pandemic continue to do so. More than one in five who used public transport previously no longer do so, with the majority switching to commuting by car.

Centra, Ireland’s leading convenience retail group has launched a new campaign that celebrates Choices called ‘Choices Define Us’. Centra is at the heart of communities all throughout Ireland with 481 locally owned and operated stores nationwide.

The campaign, created by TBWA\Dublin and planned by Starcom, encompasses TV, audio, OOH, cinema, podcasts, PR and social. Centra boldly espouses attitude, positivity, kindness and respect with a focus is on diversity and inclusion.

The OOH planned with Source out of home embraced classic posters and digital screens to great effect. Billboards comprised 48 Sheets, Metropoles the 240 Sheet in Ranelagh, plus T-Sides together with 6 Sheets in the form of Adshel including the East Link domination, Bus Shelters and Adboxes. Roadside Digital 6s – Adshel Live, Digipanels and Digishelters together with Bridges, Digipoles and the Digital Golden Square on Wexford Street made up the Digital OOH element.

Creating intrigue, unbranded teaser digital copy, displaying a collage creative style of the four designs, ran for the first three days of the cycle with a scheduled reveal following.

The campaign was recognised winning JCDecaux’s ‘Campaign of the Month’ for April.

Speaking about the launch, Ray Kelly, Marketing Director, Centra said “This is a defining time in our lives where people are making more considered choices than ever. At Centra we take great care to understand what choices people are making and the impact that those choices will have on how people live, work, and eat so we can continue to adapt and evolve our retail offers and experiences to meet the needs of communities across Ireland.”

To mark the launch of this campaign, Centra commissioned an in-depth study to provide a deeper understanding of the choices people are making in Ireland in this period of revaluation, forced by the pandemic which revealed that 1 in 2 Irish people (46%) feel their daily choices have the power to impact positively on society. Through this campaign Centra is encouraging consumers to think about choice, and to choose wisely every day.

The Right Place and at the Right Time..

The National Lottery is using digital out of home (DOOH) formats to promote its EuroMillions Jackpot. The campaign aims to connect with consumers across the country, reminding them of the life changing Jackpots which ‘could be you’. The highly visible designs by Core Creative called out last Friday’s Jackpot of €195 million. After the draw took place, the message was adapted for Tuesday’s whopping €215 million Jackpot. This simple, yet effective use of Digital OOH allowed for greater flexibility with the creative copy. The campaign runs on formats including Tesco Live, Adshel Live and dPods nationwide. 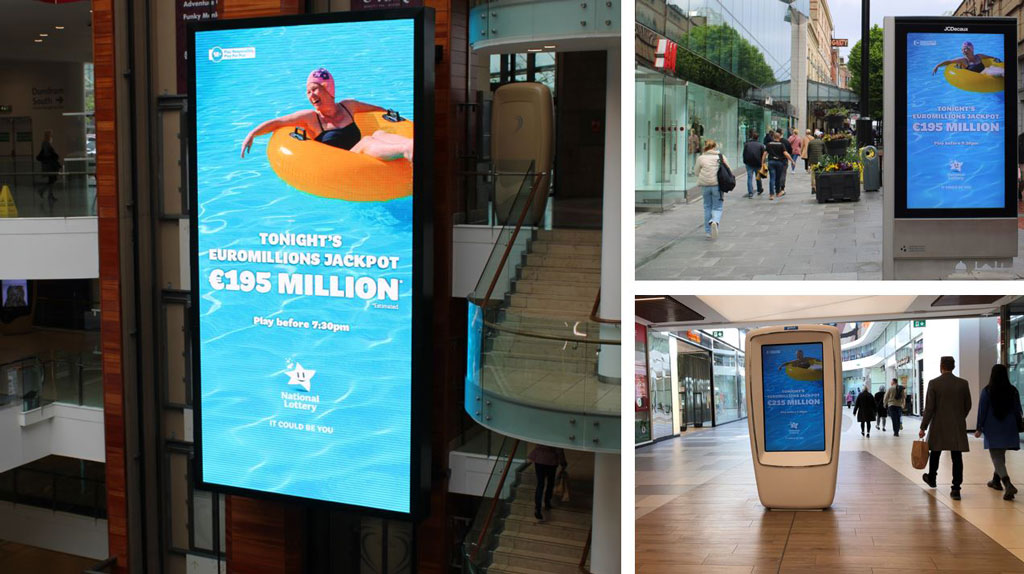 Outdoor is a location medium but its agility means its content can be hyper-relevant to time and to events happening across the physical and virtual landscape. OOH is the perfect medium to reach these large audiences at the right place and at the right time.

The campaign was planned by Starcom and Source out of home, part of PML Group. 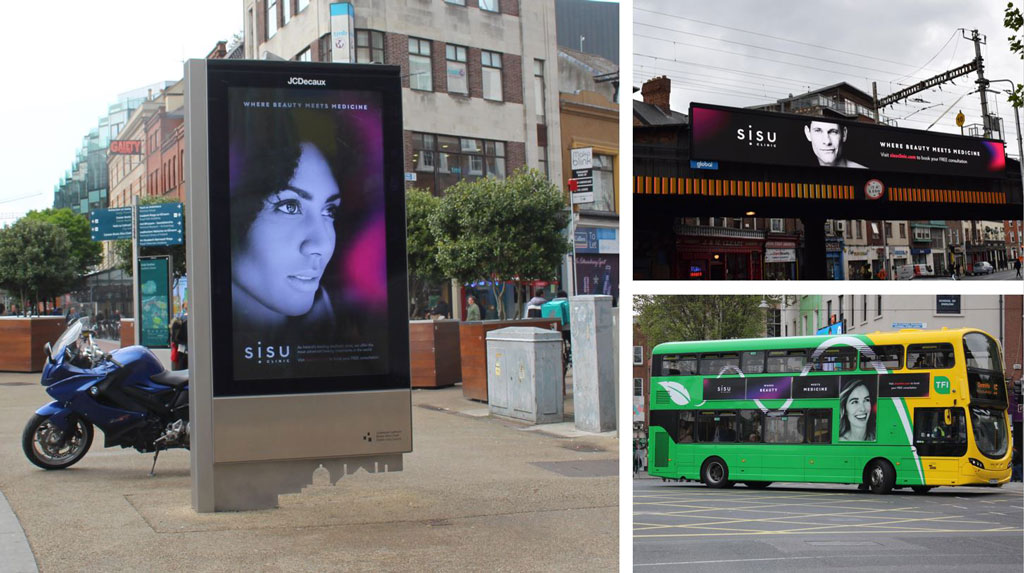 SiSu Clinic has launched a high impact OOH campaign this week to drive awareness through targeted reach across the country. The campaign incorporates multiple creative copies to target both male and female demographics. The creative also includes a call-to-action element encouraging consumers to book a free consultation via sisuclinic.com

Proximity targeting was a key objective to encourage consideration and action from the target audience.  Planned by Javelin and Source out of home, the campaign encompasses both Digital and Classic OOH formats. Formats include Digital Bridges, Adshel Live, Digishelters, 48 Sheets, 6 Sheets and T-Sides. The poster and digital sites are located close to SiSu Clinic stores. Our maps platform helped with the strategic placement of the ads.

SiSu Clinic is a doctor-led aesthetic medicine destination offering a comprehensive range of the most advanced beauty treatments in the world. According to ThinkBusiness.ie, SiSu Clinic are witnessing a growing demand for aesthetic treatments across Ireland and beyond due to the desire for people to live longer and look better.  With this in mind, OOH is the perfect medium to reach large audiences and spark further interest in this growing trend.

Commenting on the campaign, Aoife Hofler, Director of Media at Javelin “Javelin are delighted to have been appointed as Sisu Clinic’s media agency of choice in Ireland. Sisu is a dynamic young company who are growing at scale both in Ireland and around the world. The team here are super excited to work with the team at Source on this journey and drive large scale awareness through high-impact OOH campaign to the ever-growing demographic of men and women interested in aesthetic medicine. We are excited to do our part in contributing to the growth of Sisu Clinic over the coming months and years.”