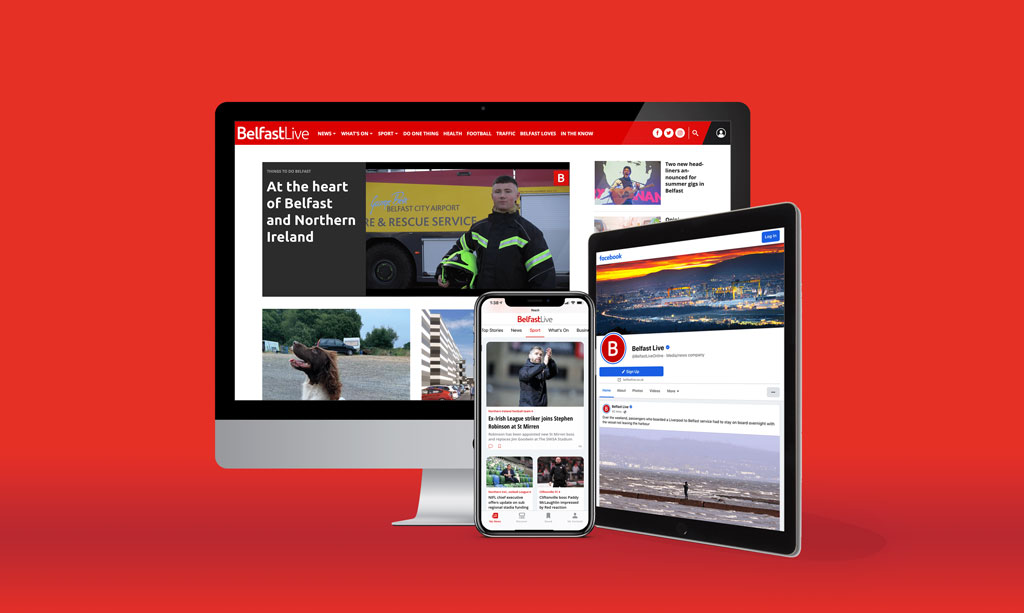 The Reach-owned Belfast Live is now reaching 49% of the population in Northern Ireland according to new research carried out by Ipsos Iris in January 2022.

According to the research- the Ipsos iris Online Audience Measurement Service (Jan)- the website hit over 22.6m page views during January with 4.1m users accessing it, 75% of who were returning readers.  The research comes as the group steps up its investment in its other Northern Ireland-based online media brands including MyDerry, MyTyrone, MyFermanagh and DogsLive.

Belfast Live is now seven years old and is now one of the group’s flagship media brands on the island of Ireland. In the Republic of Ireland, Reach also publishes online brands like Dublin Live,  Cork BEO, Galway Beo, RSVPLive, Buzz.ie and IrishMirror.

According to Cherith Andrews, group sales director, Reach Solutions NI: “It’s Hard to believe our baby is 7 years old!  When we started out, Belfast Live was a completely new concept, a totally new way of communicating with local audiences. It’s hard to believe it now reaches half the population of Northern Ireland. As well as this incredible audience, we now use our own customer data to partner with a wide range of local advertisers which offers them a competitive edge in the NI market. We’d like to take this opportunity to say a huge thank you to our readers and business partners for your support over the first 7 years of Belfast Live, we continue to listen to you all and have some exciting plans for the coming months.”

“With the pace of the daily news cycle it’s not often you get time to reflect, but we’re delighted to be celebrating our seventh birthday in such a strong position,” adds Ryan Smith, editor of Belfast Live. ““We remain comfortably Northern Ireland’s most-read news platform and in the last 12 months have continued to invest in our team.Hiring reporters in counties outside our traditional core means that we have the ability to cover Northern Ireland in a way that we haven’t before and we’re very excited about where our ‘My brands’ will go in 2022.,” he adds.