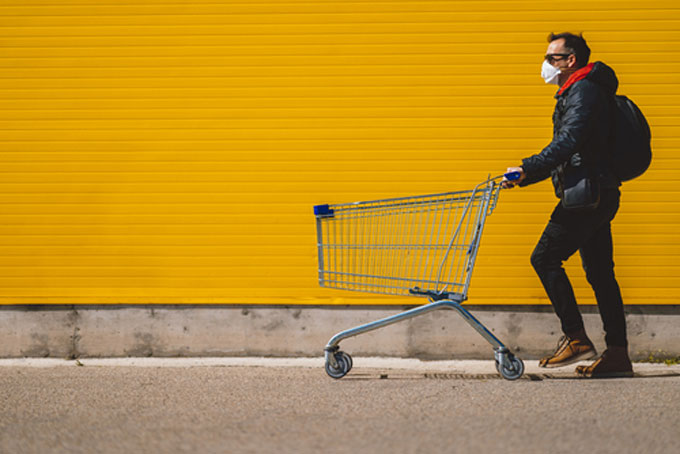 Irish consumers have strongly indicated they will continue to consciously support local shops and businesses both in person and online when the pandemic is finally over, according to research commissioned by Virgin Media Ireland and conducted independently by Amárach Research.

The Virgin Media research surveyed over 1,200 people aged 18 and over, nationwide across all regions of the country and found that 90% of respondents say they intend to shop local as much as they can. When it came to online shopping, 8 in 10 people said they will consciously buy Irish goods and services where there is a choice to do so. Similar numbers (80%+) expressed a view that people will need to ‘do more’ to support local businesses and employers as the pandemic comes to an end.

According to the research, 50% of people are currently shopping more online than they ever did before the pandemic and with the ongoing reopening, a strong preference has emerged for a continuing blended approach. While large numbers of people have returned to main streets across Ireland for groceries, household supplies, furnishing, footwear and appliances, 4 in 10 said they will still prefer to shop both online and in-person for clothing, healthcare products, accessories, consumer electronics and home entertainment, indicating that businesses and retailers will need to offer the best of both worlds.

Irish online consumers wield considerable buying power with a current average monthly spend of €230 reported by those surveyed.  Roughly half of those surveyed said they had spent up to €100 online in the past month, while a third spent between €100 and €500, with 1 in 10 saying they spent up to €1,000 or more. Central Bank of Ireland statistics put online spending using credit and debit cards at €2.7bn for May 2021, an increase of 30% on the prior year, representing 47% of all Point of Sale spending for the month. 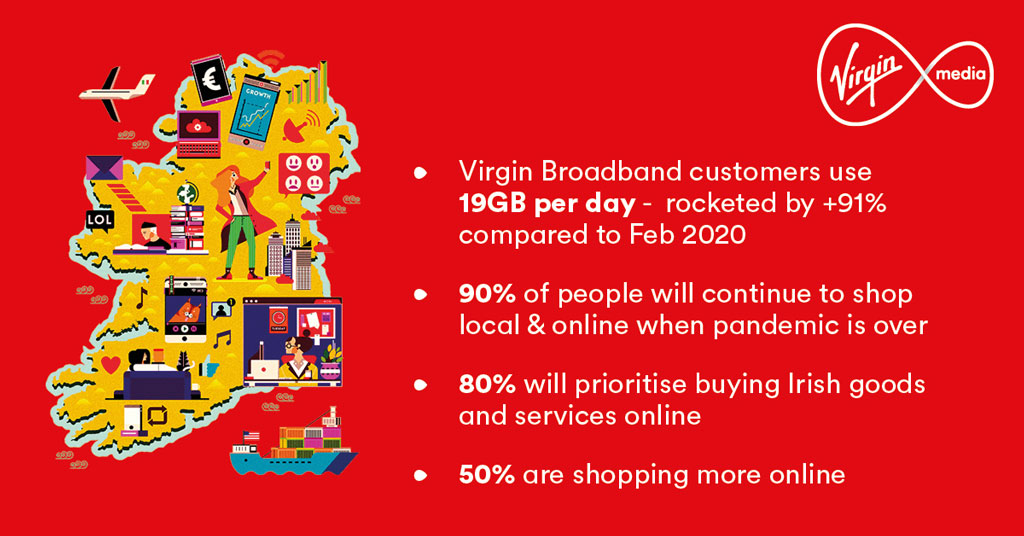 The research also found that food takeaway and delivery to the home will continue to be popular with up to 70% of consumers in this category saying they will still be ordering online.

The research also highlighted the importance of high speed broadband networks to life and living in Ireland. Figures from Virgin Media show that people are now far more engaged in online activity than ever before, which is set to continue.  The research also shows that during the pandemic 44% of people increased their amount of streaming with  7 in 10 people now saying they’ll continue watching the same or more Netflix content.  In addition, 40% of people say they use broadband between 2 – 5 hours daily watching a variety of streaming video services.

On average, 25% of all respondents said they’re using broadband to watch video streaming services more than ever before, including Netflix, YouTube & Amazon Prime, while 20% said they’re watching more video content on Instagram, Facebook and TikTok.

In a clear sign of online activity leading to changing consumer behaviour, the research noted that nearly 1/3 of respondents said they had started listening to more podcasts and Spotify during lockdown, with 9 out of 10 people saying they’ll continue to listen to the same amount or more after lockdown. With Zoom meetings and online video calls keeping people connected with their family and friends during the lockdown, half of all respondents said they’re still ‘Zooming’ to some extent for social gatherings (not work related), and overall, 40% of us are now doing this more than ever before.

With many people working from home during the pandemic, the research noted that expectations around working behaviours also seem to have changed for good, with 8 in 10 people saying they favour a hybrid working model, spending some days working both at home and in the office.  Respondents said their preferred split in remote working habits is to work three days at home and two days in the office.