Today we publish the latest wave of The Media Impact Study, in which 300 Dublin residents aged 16-54 were surveyed. The study ascertains the media channels which respondents themselves feel are most likely to succeed in gaining their attention in the coming months.

Among all respondents, TV and OOH lead the way, followed by online advertising in the form of social media and websites. OOH features in the top two media across virtually all age groups, genders and social classes. Main shoppers rank OOH number one medium most likely to impact them, reflecting the array of POS OOH opportunities.

The findings broadly reflect similar studies we carried out on two separate occasions in the past year and points to a trend for traditional media being perceived by consumers as most effective for them. 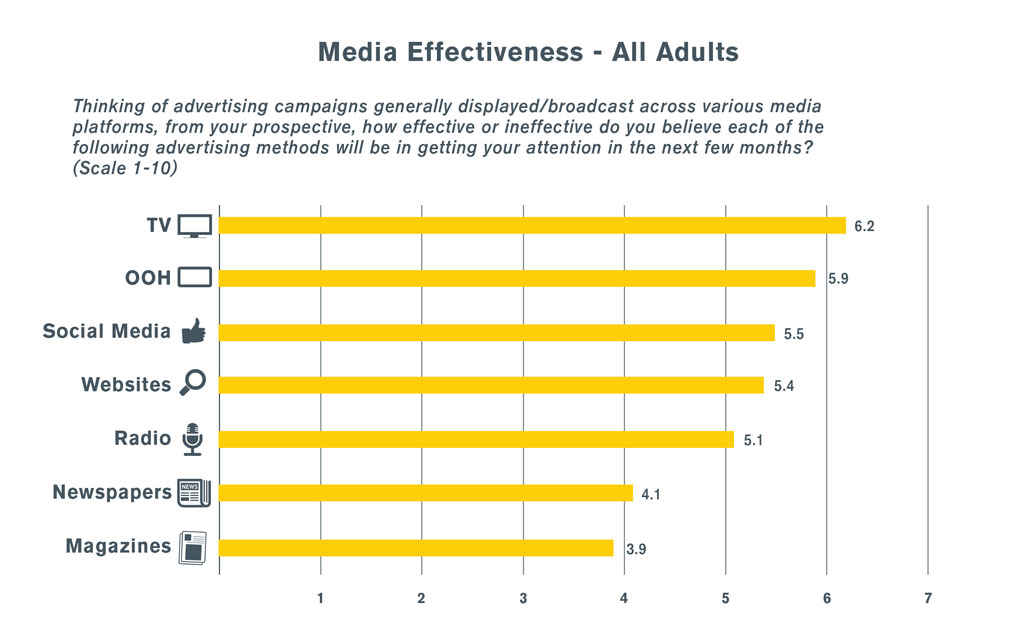 The study was carried out by Ipsos MRBI on behalf of PML Group.

The retail sector was by far the biggest spending category on Out of Home media in the first half of 2021. The Posterwatch figures, produced by PML Group, show that the sector accounted for 18% of OOH display value across the first thirteen cycles of the year (28th Dec ’20 – 27th Jun ’21). Supermarkets account for approximately 60% of the retail sector spend. Musgrave Group, Tesco and Aldi are all among the top 10 advertisers on the medium for 2021 to date.

Despite restrictions on the hospitality sector for much of the first half of 2021, the Beers & Ciders category continued to invest in the medium and was in second spot in terms of display values.  Diageo remains the country’s top spending OOH advertiser with Heineken Ireland also among the top 15. The sector is up significantly on 2020 but compared to 2019 it is down by 18%.

The Food category has increased its display value by 34%, compared to the same period 2020. The increase compared to 2019 is 28%. Kerry Group, Kellogg’s, Glanbia and Kraft Heinz were prominent advertisers in this sector.

The Media category comes next in fourth spot and Sky is its largest advertiser. Disney also features among the top 10 advertisers in H1, employing OOH extensively to showcase releases on its Disney+ streaming service.

Mondeléz comes in at third spot in terms of advertisers, behind Diageo and Sky. Other advertisers to feature in the top ten include McDonald’s and Coca Cola. 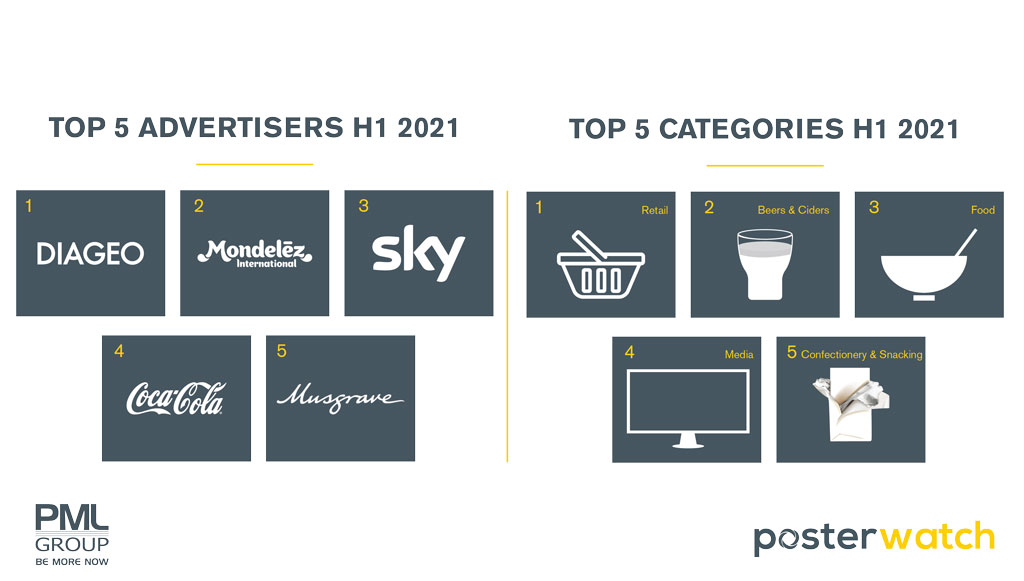 Digital OOH advertising now accounts for approximately 28% of investment in the channel by brands and PML Group expects this to increase in H2 as recent new launches such as Digital Bridges and Adshel Live phone kiosks will be part of the OOH landscape for the entire second half of the year.

Despite the economic uncertainty of recent months, investment in the OOH medium from many of the country’s biggest and best brands has remained strong. We’ve seen parallel investment by media owners to improve the quality and choice for clients. At PML Group, we continue to invest in our suite of data, tools and services to best connect these brands and the audience that OOH delivers.  It means OOH is ideally positioned to positively influence clients’ objectives into the second half of the year, and into the post-pandemic environment beyond.

For more information on Posterwatch and the OOH market please contact info@pmlgroup.ie.

Despite our failure to qualify, Irish football still had a keen interest in the outcome of Euro2020, thanks to an innovative initiative by Paddy Power. For every goal that England scored in the tournament, the bookmaking firm pledged to contribute €10,000 to grass roots Irish clubs. Kane & Co netted 11 times over the course of the tournament, coming to a total of €110,000. But a welcome final twist was that the sum will be paid out in pounds Sterling, as a nod to the performances of Raheem on the pitch. So, a revised total of just under €129,000.

Digital OOH played a key role across the competition, keeping Irish fans updated on the running total while at the same time poking fun at ‘the auld enemy’. It’s a really clever use of the agility of the format, combing relevant updates with real world event-based marketing.

That has to rank as one of the best outcomes for Irish football in a major tournament for years! 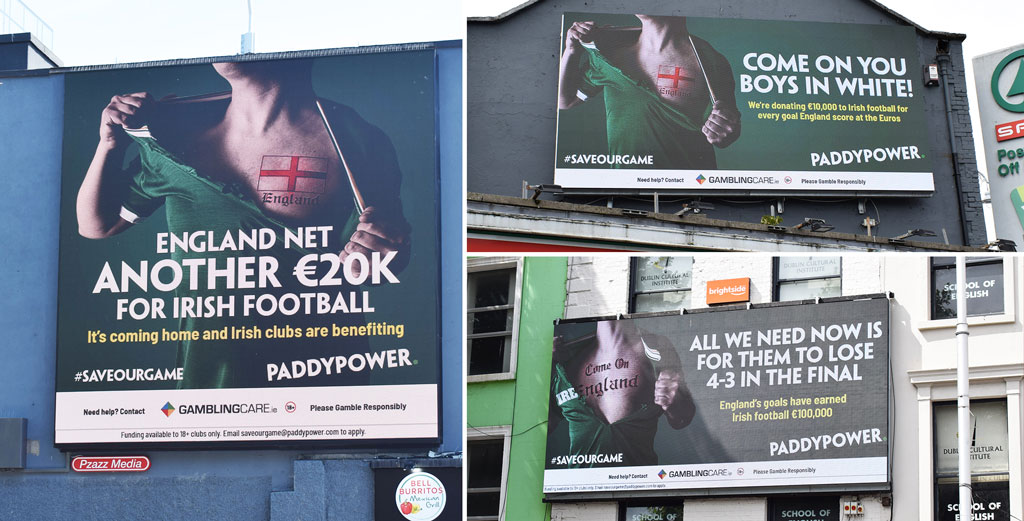 Surge in Pub Spending Bodes Well for Return of Indoor

With a firm plan now in place for the return of indoor hospitality later this month, pubs and restaurants can expect busy times ahead. It appears Irish consumers have embraced outdoor dining and drinking in June and one would expect the trend to continue in safe indoor settings. According to AIB’s Spend Trend report for June, Irish consumers spent €90,000 an hour at pubs across the month. A further €288,000 an hour was spent on outdoor dining in restaurants. 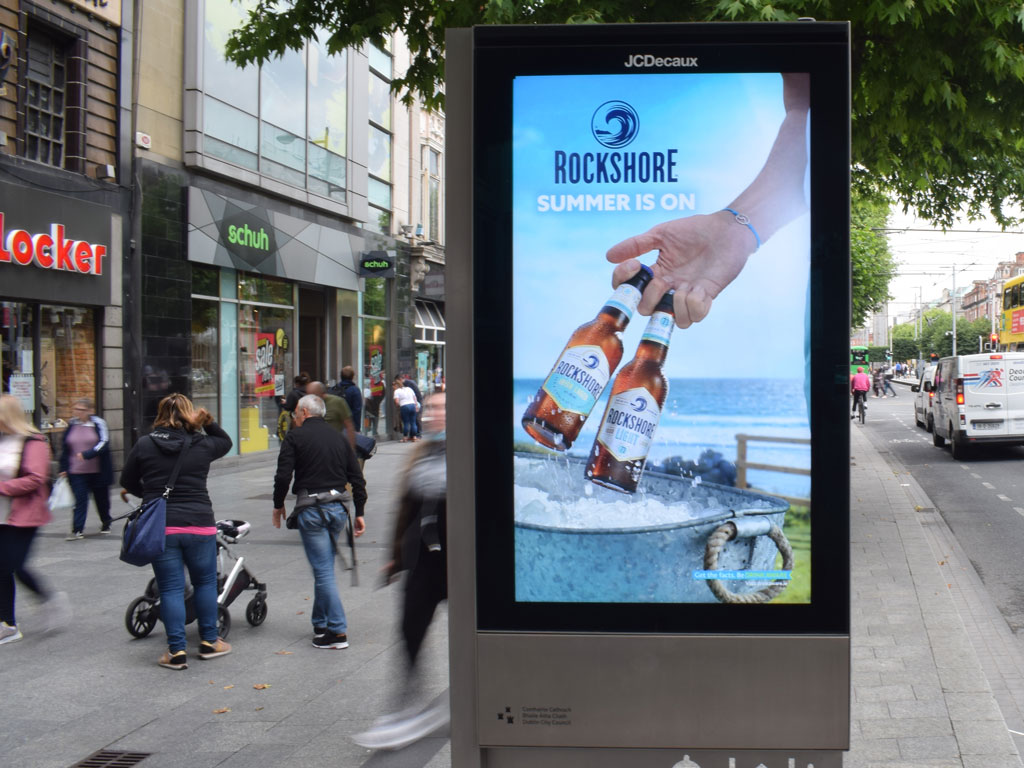 “Having partially reopened in June, the hospitality sector saw a surge in spending, albeit from a low base, as consumers flocked to pubs, restaurants and hotels throughout the month,” John Brennan, head of SME at AIB said.

This is another fillip for the OOH sector, as hospitality drives footfall back to city centres, hot on the heels of the huge boost in numbers that the reopening of non-essential retail brought some weeks ago.

Weather has proven to be one of the most popular creative triggers for brands using Dynamic OOH advertising in recent years. In July, McDonald’s are once again engaging our Liveposter platform to serve creative based on the temperature. Specifically, the restaurant chain, are showcasing their Frozen Strawberry Lemonade and Caramel Iced Frappé when the mercury hits 18 degrees.

The campaign can be seen on digital networks including Digpanels and Adshel Live Kiosks.

The brand can also be seen this cycle on the new Digital Influencers bridge network in Dublin, maximising the agility of the digital platform to display multiple messages across the city. 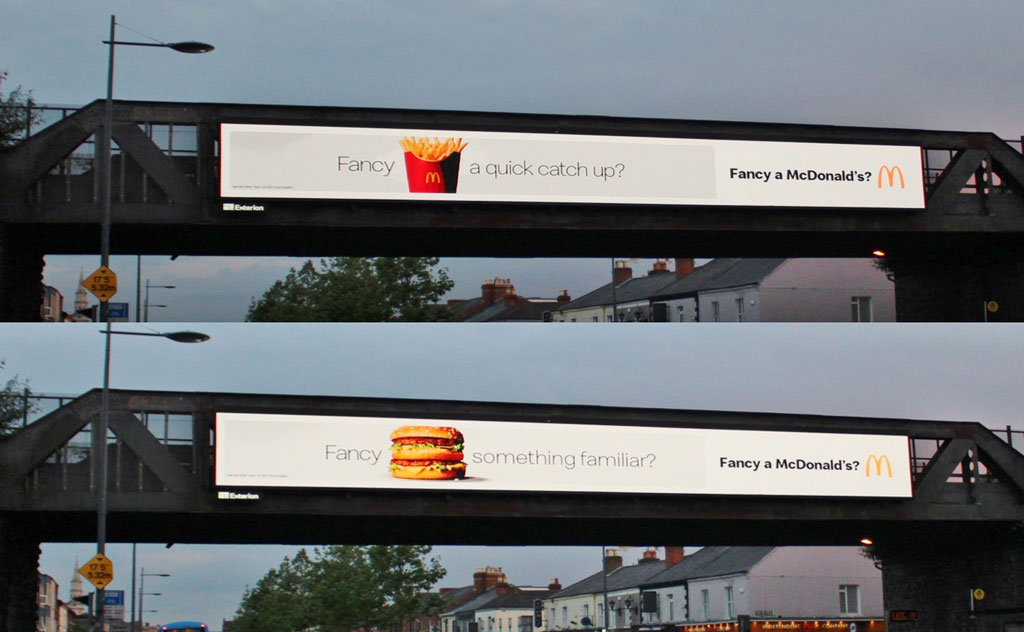