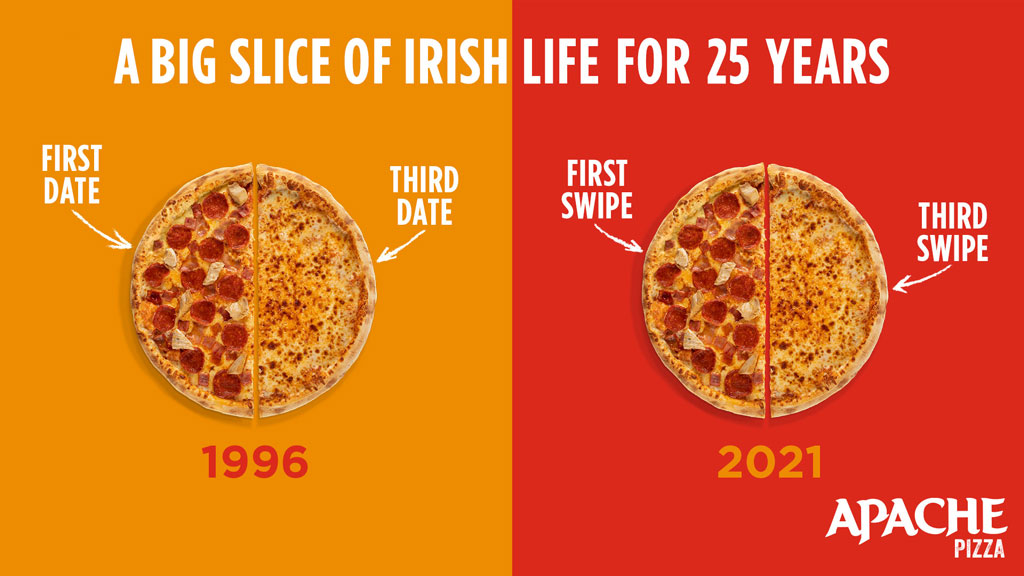 Apache Pizza is celebrating its 25th anniversary with the roll out of a new campaign which takes a nostalgic and humorous look at how much life in Ireland has changed since it opened its first store in Dublin in 1996.

The campaign, which was created by In the Company of Huskies, reflects on the events, topics and cultural shifts that have led to countless conversations over an Apache Pizza during the past 25 years.

It runs across OOH, digital and social, putting the spotlight on how we’ve moved from nights out in Coppers to trying our luck online, on how the tradition of first and third dates has given way to swiping and on why we’ve given up arguing about whether Kerry is better than Dublin.

Apache Pizza is the largest pizza chain in Ireland. It served over 5.3 million pizzas to customers during Ireland’s Covid-19 lockdown. It currently operates 170 stores and plans to open another 20 new stores before the end of the year.

“Apache Pizza has been part of Irish life since 1996. The whole idea was to take a moment to reflect on some of the events, topics and cultural shifts that were hot out of the oven over the years and that were no doubt discussed and debated over an Apache Pizza,” according to Damian Hanley, creative director at In the Company of Huskies.

“This campaign takes a look at how we lived life in 1996 compared to how we are living it today. A lot has changed over the past 25 years but Apache Pizza customers will happily agree that it’s always better to talk about the events of the day with a slice of pizza in your hand, or better still, with your mouth full,” he added. 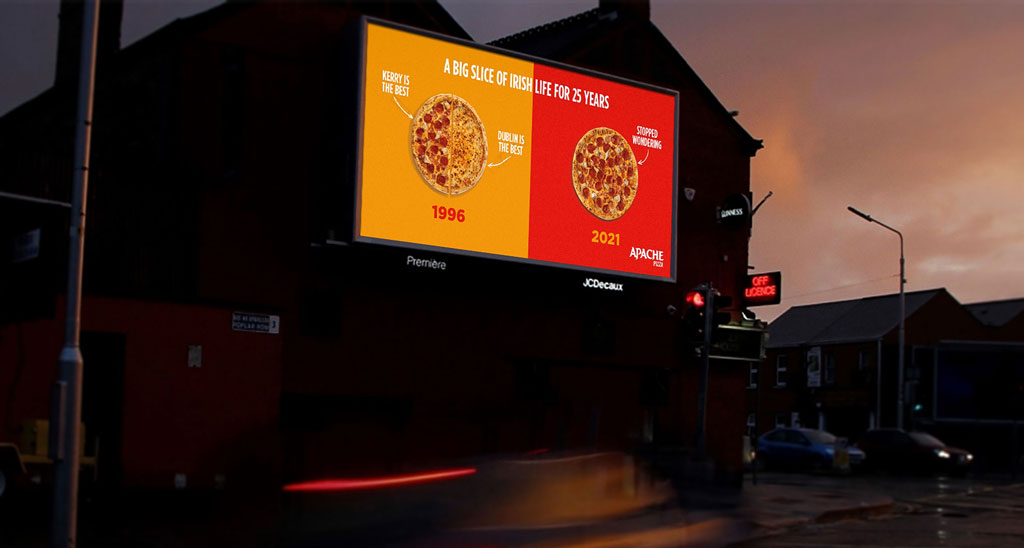 According to Sandra Carrasco Rodriguez, senior brand manager, Apache Pizza: “Apache Pizza is a proud Irish brand with a tradition of being there whenever our customers want to enjoy great pizza. This campaign captures that perfectly and it connects with our audience on a cultural level. Huskies fully met our objectives and the creative has been very effective in engaging our audience in a nostalgic and humorous way that is relevant to our 25th Anniversary.”

“This campaign has really connected with our audience. The reaction has been amazing and it has started and reignited some great conversations and debates. Customers love to reminisce and to share their memories over their favourite pizza and Apache Pizza is delighted to bring people together, to get them talking and to be part of the conversation,” she added.

Apache Pizza is owned by Food Delivery Brands, the largest and most geographically diversified pizza delivery master franchiser in the world by store numbers and by OKR Group, Ireland’s leading QSR franchise operator.

Agency: In the Company of Huskies