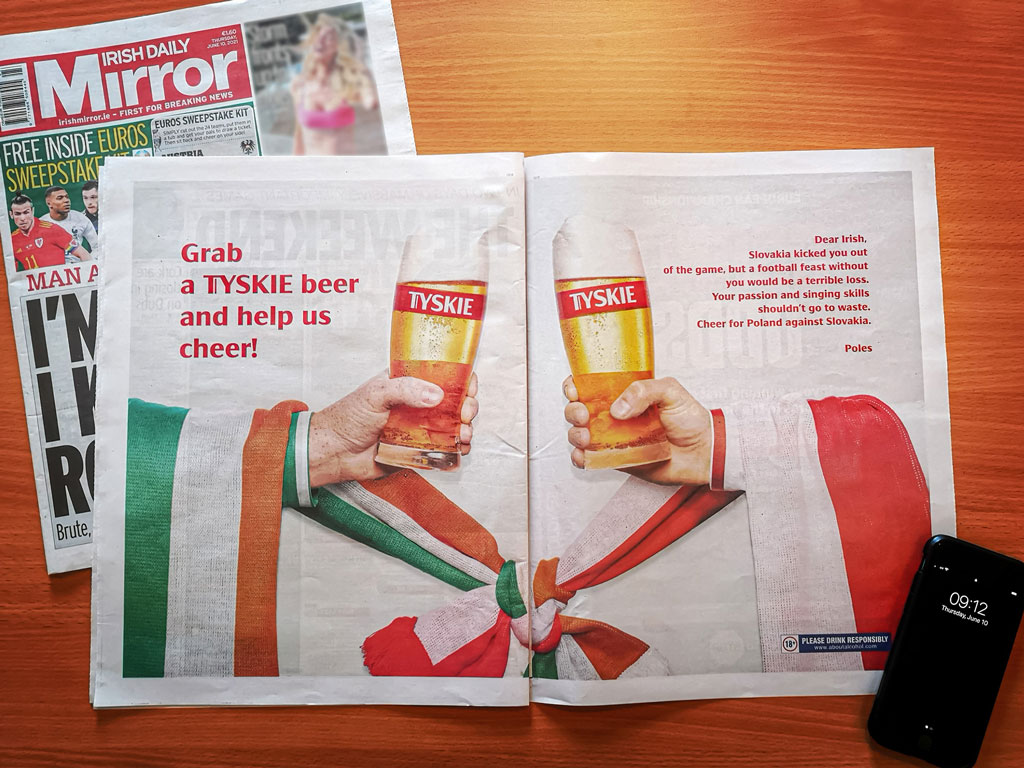 The Republic of Ireland may not be taking part in the UEFA European Championship in Russia but the makers of the popular Polish beer-brand Tyskie has run a campaign in the Reach-owned Irish Daily Mirror and the Irish Daily Star urging Irish fans to delve deep into the spirit of 2012 by cheering for Poland on June 14th when it takes on Slovakia, which booted Ireland out of the qualifiers after a dramatic penalty shoot-out last October.

Irish fans left an indelible impression on the citizens of Poland – and the city of Poznan in particular – during the UEFA European Championship in 2012 and reports of bars in Poznan running out of Tyskie beer were far from exaggerated.

Now Tyskie, which is owned by the Japanese beer giant Asahai, in collaboration with Polish agency GONG, Huta 19m, Zenith in Dubin and the Reach-owned titles the Irish Daily Mirror and the Irish Daily Start are calling on Irish fans, who might be sitting on the fence, to jump off it and cheer for Poland.

“Dear Irish,” the ads run, “Slovakia kicked you out from the game, but a football fest without you would be a terrible loss. Your passion and singing skills shouldn’t go to waste. Cheer for Poland against Slovakia.”

In the footballing world, there is great rivalry between the two countries who also share a border together.

“In keeping with the campaign slogan, “We are the European Champions in making friends,” we want to unite fans from all over Europe,” says Paweł Drubkowski, brand manager of Tyskie at Kompania Piwowarska.

“Polish and Irish fans have a unique bond, dating back to the 2012 Euro Cup. When the Irish team was eliminated by Slovakia and its amazing fans were left without a team in the European Championship, we knew that we had to reach out to them. Our ad in the Irish Daily Star and the Irish Daily Mirror is an incentive to make friends due to our shared passion and favourable circumstances, but also a form of appreciating the great energy of Irish fans,” he says.