As the non-essential retail sector reopened on Monday, Dublin Town reported an uplift in footfall across the city centre. It recorded footfall of 208,000 which approximately equates to 140,000 people visiting the city centre. The footfall is 54% of the number of people that were in town the same day in 2019.

Monday’s footfall levels were above those recorded in June last year when non-essential retail reopened after the first lockdown. On June 8th last year footfall in the city centre was 190,000 suggesting a 10% increase this week compared to then.

Dundrum Town Centre also reported on the footfall in the retail centre which was 11% higher than pre-pandemic levels on Monday afternoon. 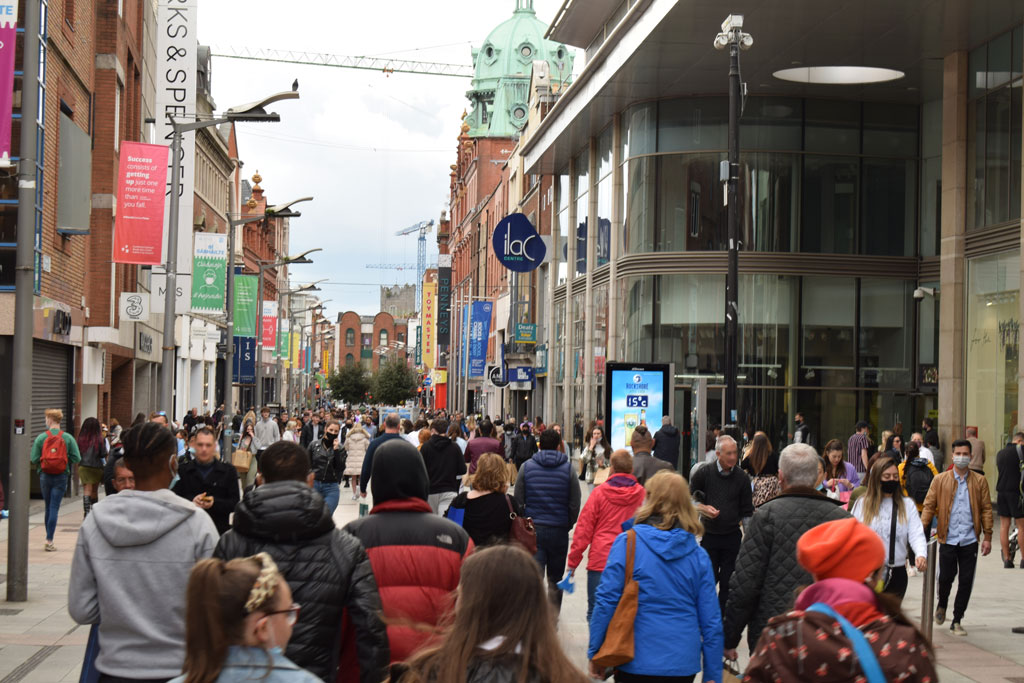 In two weeks’ time, we will see hotels and B&B’s swing open their doors with a big staycation boom expected as we head into the summer months and schools begin to wind down for the holidays. The following week on June 7th, the grand reopening of restaurants and bars will happen with outdoor dining infrastructure already in place to encourage and cater for customers returning to city centre hotspots, towns and villages – all contributing to more encounters with OOH advertising touchpoints. 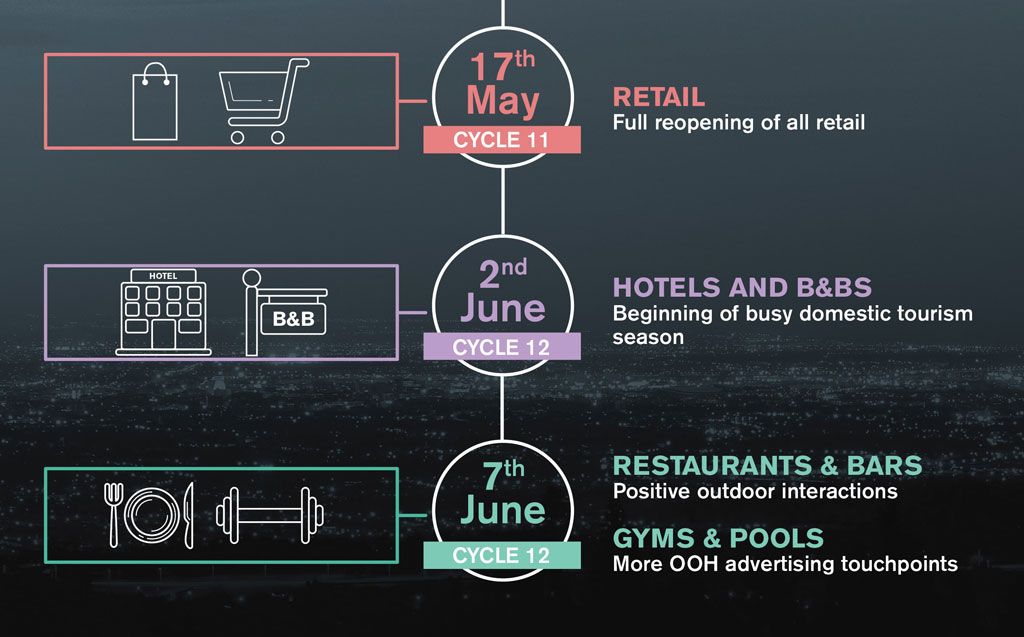 The seven-day average for Apple’s routing requests mobility data to Tuesday 18th May shows traffic reaching 98% of last year’s pre-pandemic baseline and was and above baseline Fri-Sun. Trend results indicate the resumption of inter-county travel and all retail should see traffic levels soon exceed baseline, as indicated by Tuesday’s figures which have traffic mobility above baseline in 70% of counties. 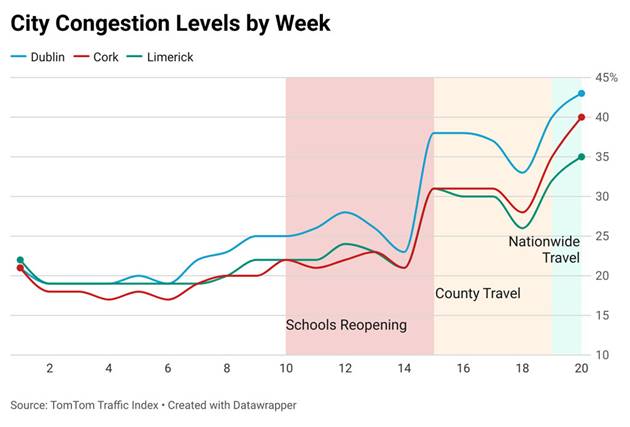 Public transport volumes have more than doubled since the start of the year to reach 60% of baseline by Tuesday. The resumption of full timetables and a doubling of capacity should result in further increases in the coming weeks.

TomTom’s Traffic Index reports that last week’s congestion in Dublin reached yearly highs averaging 40%, up from 26% in March and 33% in April. To give historical context that is down just 9% on same week in 2019 while in week 19 last year the figure was just 16%.

This week is on track to be the busiest so far this year peaking yesterday (Thursday) with a congestion level of 48%. This means that a 30-minute trip during peak hours takes 14.4 minutes longer than it would during uncongested conditions. Congestion yesterday peaked at 92% at 9am and then at 61% at 3pm. 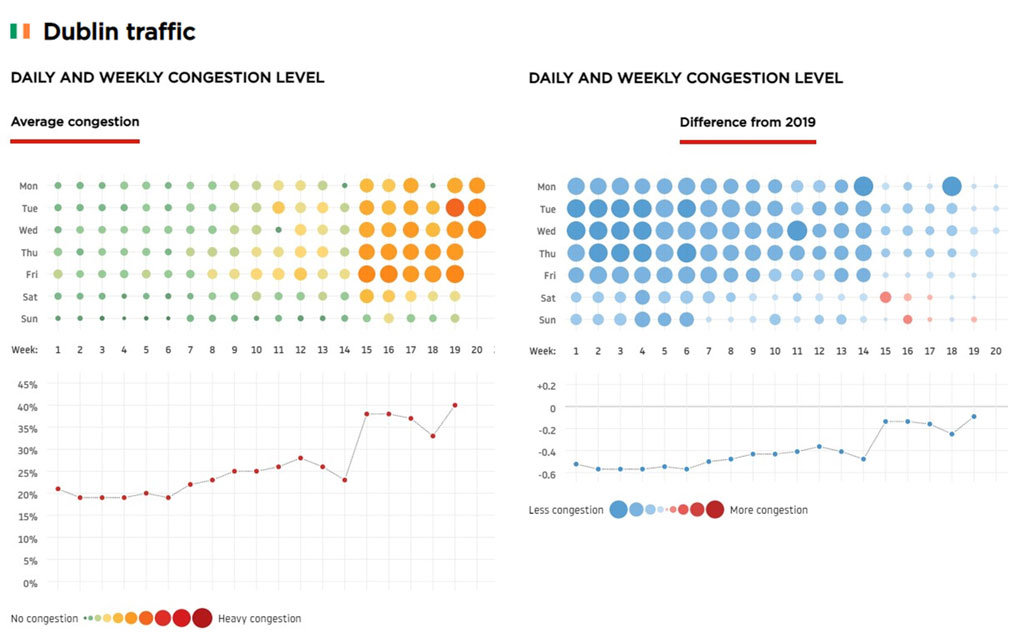 Last week’s national Locomizer mobility data, based on analysis of mobile phone location movements via anonymised app reporting, shows a relative +15% increase on previous week to 85% of pre-pandemic levels. This constitutes a doubling in mobility the past three months and a relative increase of +50% on the figure recorded only in mid-April. 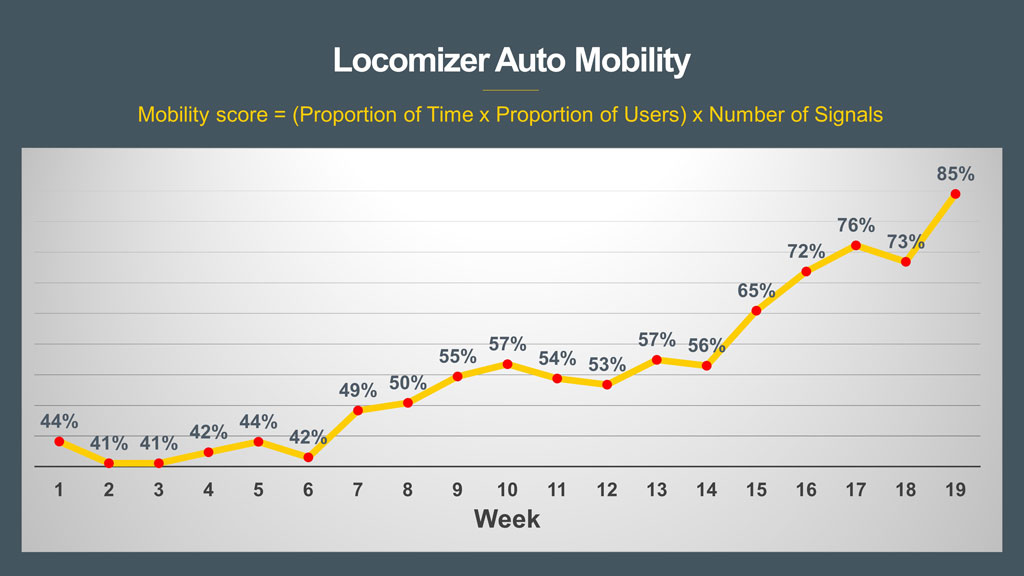 The TII is reporting that traffic volumes are now +6% above levels experienced before the introduction of Level 3 restrictions in October of last year.

Wednesday’s totals from the sample of ten traffic counters located on the national road network for the morning period from 7am until 10am give the following comparisons:

Stepping Out: Dubliners Keen to be Outdoors Again

As restrictions ease and the narrative very much centred on an outdoor summer, our ‘Stepping Out’ research study, conducted by Ipsos MRBI, identifies and establishes what activities consumers are most likely to engage in over the summer months. 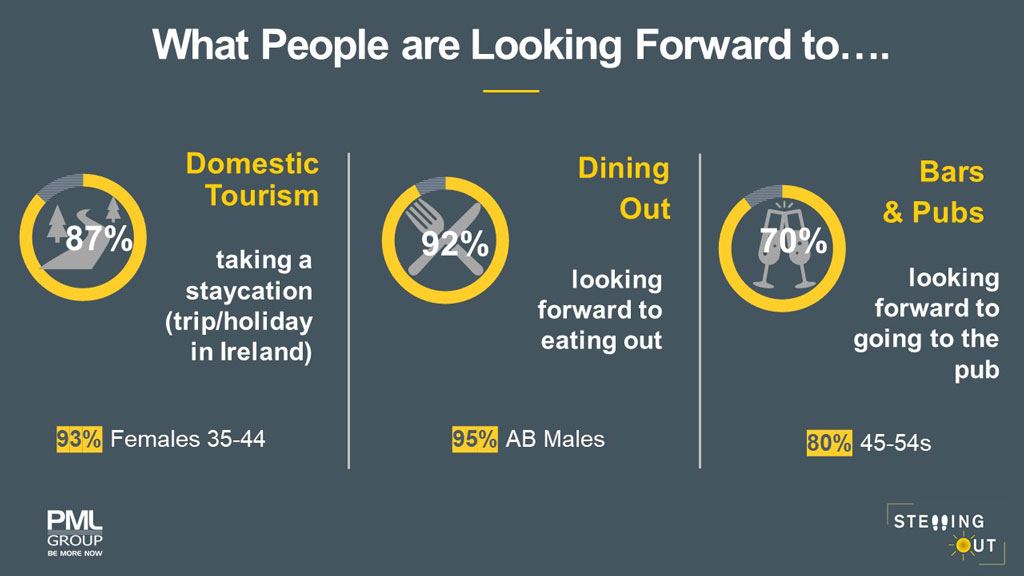 With the next phase of restrictions due to lift in early June, our latest round of data reveals a high level of intention to engage in certain activities over the summer months.

As the country opens up and hotels and other accommodation venues begin operations again, the Dublin population is anticipating a summer of staycations and rediscovering their favourite leisure pursuits.

Overall, eight in ten Dubliners are looking forward to taking a staycation this summer. The study shows that 92% of women look forward to a holiday in Ireland this summer compared to 76% of males. Little difference is seen in terms of age demographics, however younger age groups are slightly more excited at the prospects of a staycation, peaking at 87% for those aged between 25-34.

Among the 10 activities researched, eating out in a restaurant is the one Dubliners miss most, with 92% looking forward to getting back to their favourite eateries. Again, there was a slight female bias (97% compared to 87% of males).

The study highlights a big appetite among Dubliners to get out and about and make up for lost time. There’s a real opportunity for brands to now engage a much happier, confident and optimistic audience out of home, as they reconnect with each other and re-engage in their favourite activities.

According to the latest B&A Consumer Confidence Barometer, consumer confidence in April was at its highest since the pandemic began with the easing of lockdown restrictions and the progression of the vaccine roll-out contributing to the uplift in confidence.

While still below pre-pandemic levels, consumer negativity is diminishing with confidence currently at -27, a significant improvement compared to March 2021 (-46). 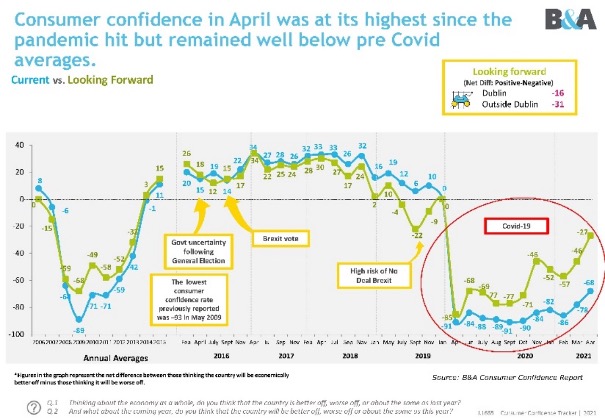 Consumer caution towards spending has decreased with a quarter expecting to spend more over the next year, while 49% expect to spend more or less than same. Attitudes towards saving have balanced out.

Core’s latest Consumer Mindset report also speaks to this uplift in consumer confidence. The report reveals that 63% of adults now say they are optimistic that Ireland can overcome the COVID-19 situation. This growing confidence is again attributed to the continued roll-out of the COVID-19 vaccine and the easing of restrictions. 72% of people who have received a dose of their vaccine are the most optimistic, higher than the general population. Three in four adults stated they felt happy about the re-opening of the country. 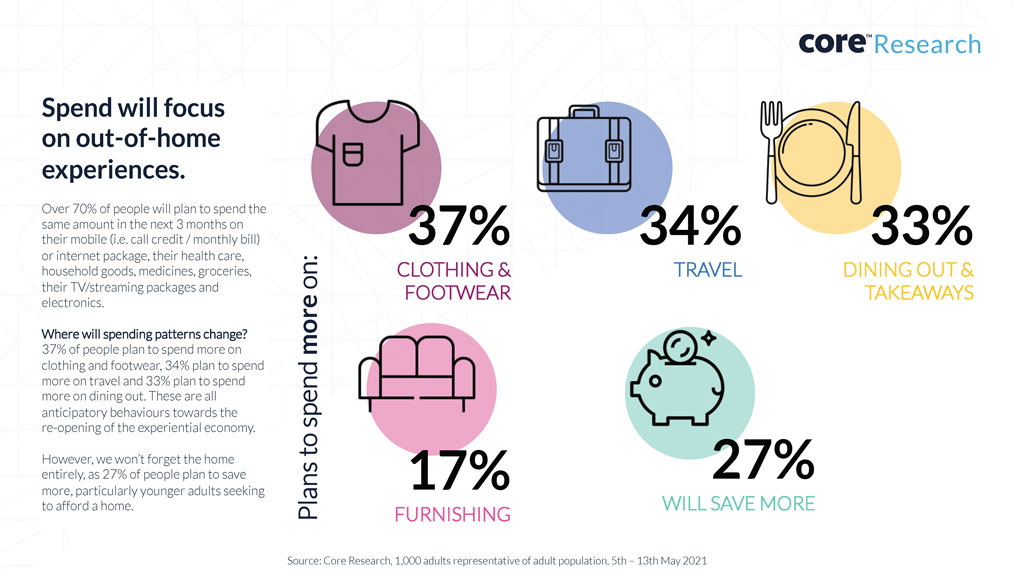 33% of families with young children plan to spend more time with them; and 14% of parents with teenagers say their number one focus is the mental well-being of their family. 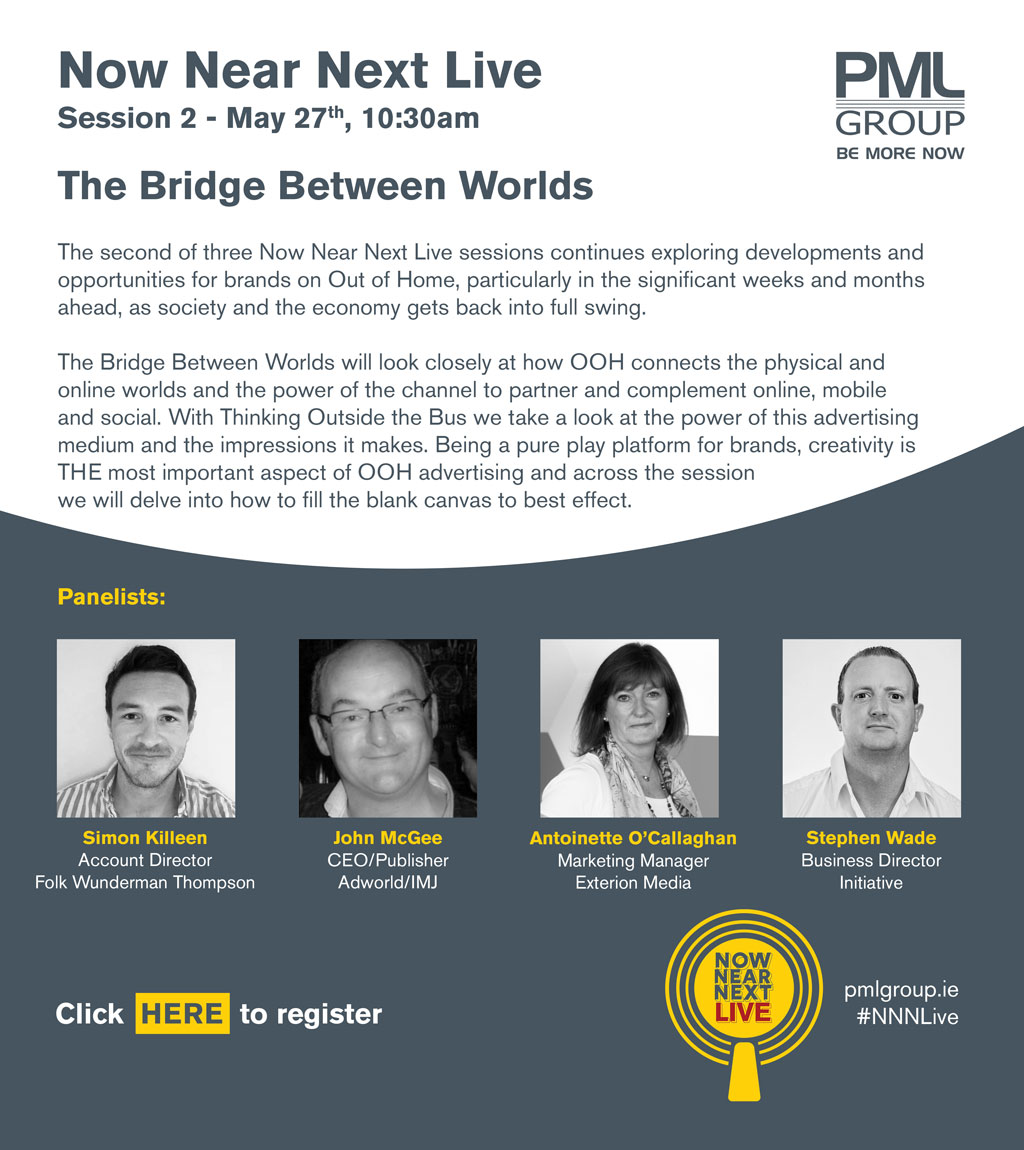 You can view a recording of Session 1: Rediscovering Outdoor HERE