Monday saw the most substantial easings of restrictions so far this year, with a range of social and economic activities resuming.

It has been reported that over 12,000 businesses reopened their premises this week for the first time in months.  As more businesses open so does the amount of people commuting to work. The Department of Enterprise, Trade and Employment estimates around 100,000 people will return to work this month as the restrictions continue to reduce.

With the country in Level 5 lockdown and spending opportunities hampered, pent up consumer demand has been unleashed. Retail Ireland estimates that Irish consumers will splash out more the €3bn in stores this month, expecting consumers to spend 40% more on debit and credit cards this month than in a normal year.

The reopening has also contributed to an increase in footfall in the city centre, Dublin Town reported that the number of people visiting town doubled on Monday compared to the previous week, which equates to approx. 100,000 shoppers.

Among the other changes, all travel limits are now lifted, social gatherings extended, and more amenities now available.

All of these factors contribute to OOH’s buoyancy as more people begin to travel to work, engage in more leisure activities, travel further afield – strengthening and increasing audience levels.

As we begin to see our mobility increase and expand, the advertising options in the public space has grown significantly with more audiences exposed to the OOH medium and more opportunity to meaningfully connect with audiences. 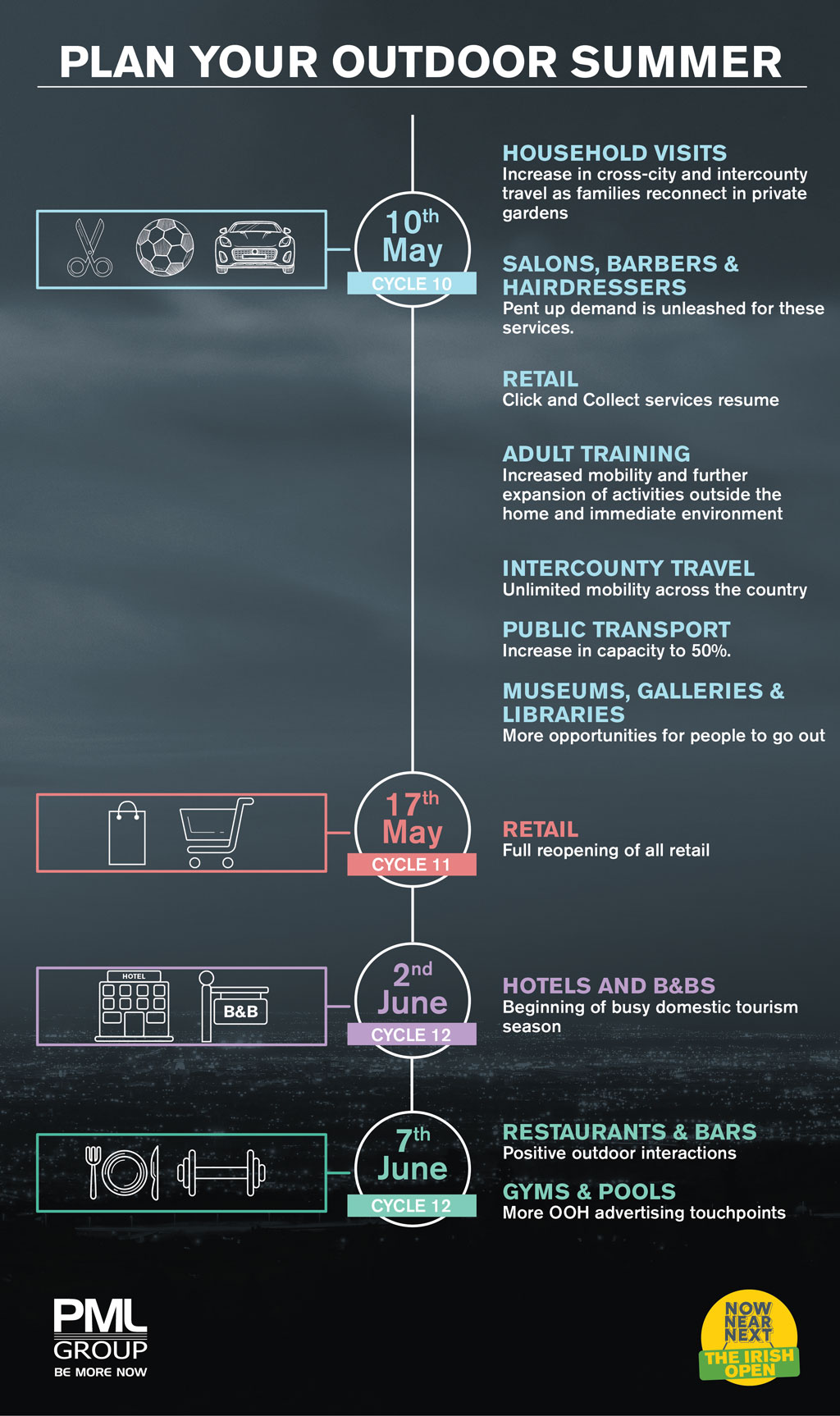 New Research Reveals Activities Dubliners are Most Looking Forward to

As restrictions ease and the narrative very much centred on an outdoor summer, our new ‘Stepping Out’ research study, conducted by Ipsos MRBI, identifies and establishes what activities consumers are most likely to engage in over the summer months. 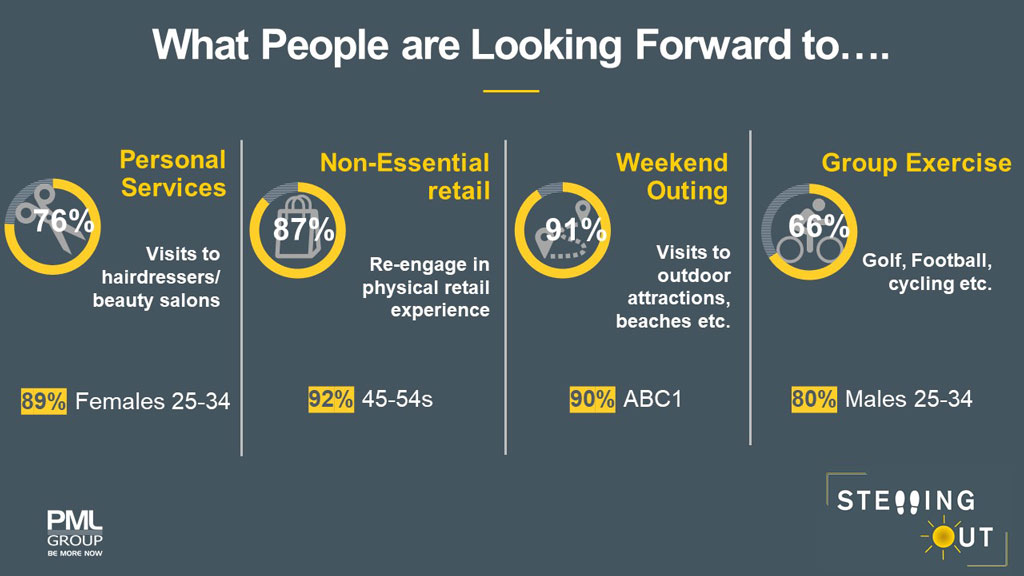 With personal services such as hairdressers, barbers, and beauty salons back this week, the Dublin population are eager to get back in the salon seat. Almost 8 in 10 of the 300 Dublin respondents (78%) stated they are looking forward to visiting hair/beauty salons.

Maybe not surprisingly, there is a female bias in regard to visiting hair and beauty salons (88% vs. 64% of males). A whopping 99% of 35-44 females stated they were looking forward to re-engaging in these personal services.

Non-essential retail will fully reopen on Monday with already strong demand noted for those who resumed click and collect and shopping by appointment services this week. Our research reveals 87% of adults are keenly anticipating the return to the physical retail shopping experience, peaking at 92% of 45-54 year olds.

With travel across the width and breadth of the country now allowed and the list of places we can go endless, there is a strong desire for more weekend outings. Nine in ten respondents stated they were looking forward to more weekend adventures such as visiting outdoor attractions, beaches etc.

As outdoor gathering numbers expand and outdoor training kicks off, many are looking forward to re-engaging in group sports. Two thirds of the respondents are eager to begin participating in such group activities peaking at 80% for males aged 25-34. 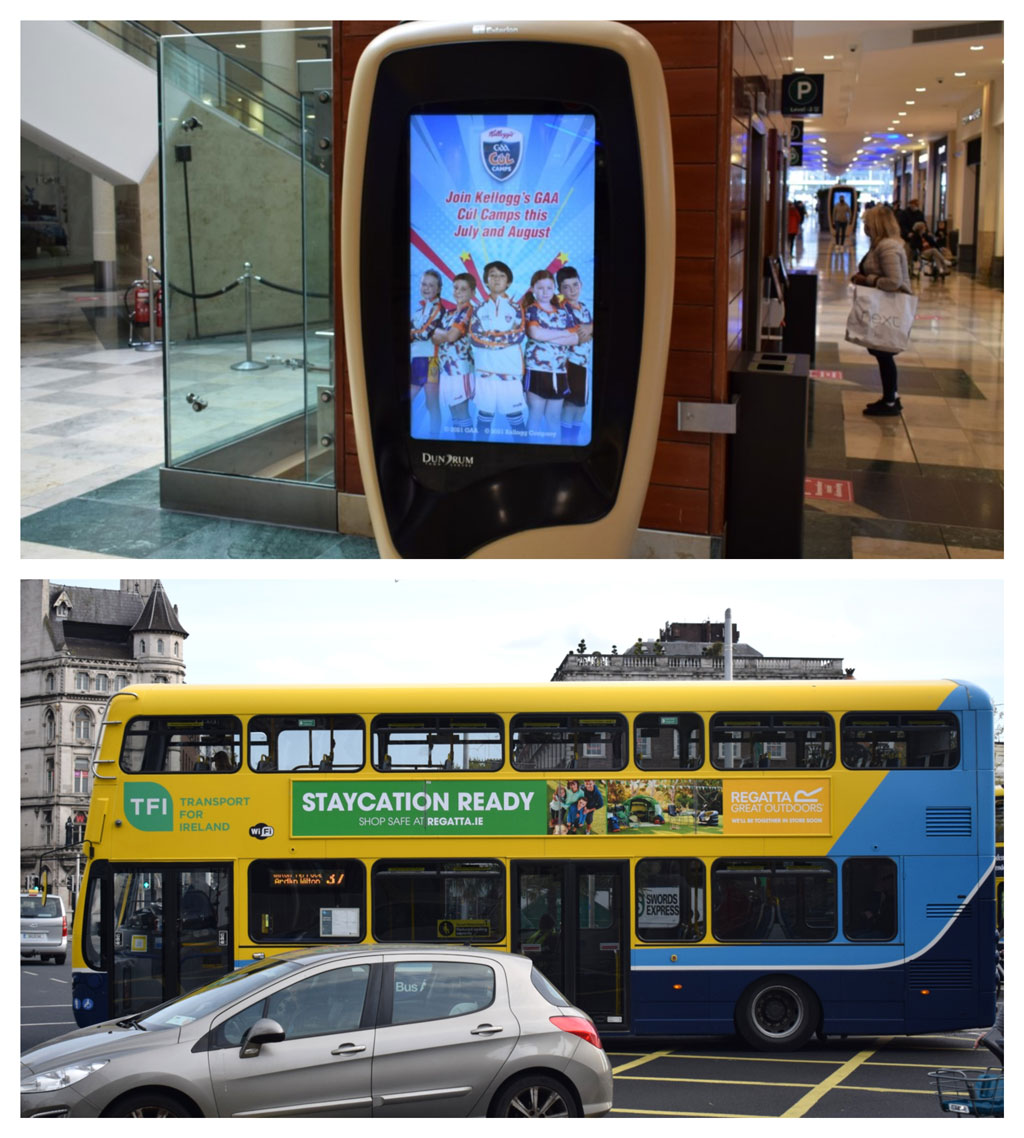 From the above research, it’s clear that people are missing everyday interactions and activities and further solidifies the pent-up demand and anticipation we are all experiencing.

More from our Stepping Out research next week.

There is an even split in the numbers of Dubliners currently working at home versus the normal workplace. Just over 40% say they are working from home exclusively at the moment with an almost identical number claiming to be working only at their regular place of work. 17% are combing both. There is no major difference in age groups but most likely to be found working from home are the 25-34 year olds, at 45%. Least likely are 45-54s, at 35%. A greater percentage of males are working from home (42%, vs. 39% females).

The recent surge rush hour traffic and footfall back into Dublin city reflects the fact that the majority of workers are spending at least part of their working week back in the workplace. 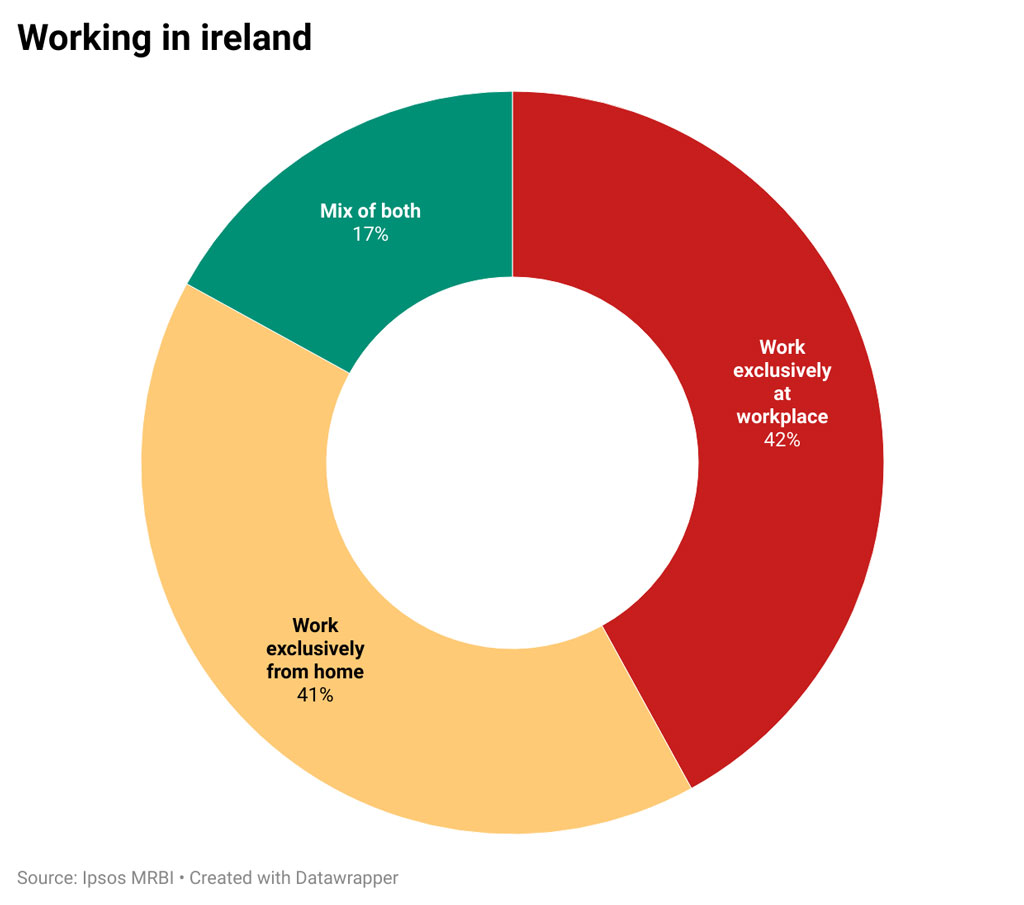 The seven-day average for Apple’s routing requests mobility data to the 11th May shows traffic remaining solid at 87% of last year’s pre-pandemic baseline. Recent gains levelled off last week which can be attributed to the bank holiday and some schools off. Preliminary results indicate the resumption of inter-county travel from this week should see traffic levels approach baseline as indicated by Wednesday’s figures which have traffic mobility above baseline in 43% of counties. 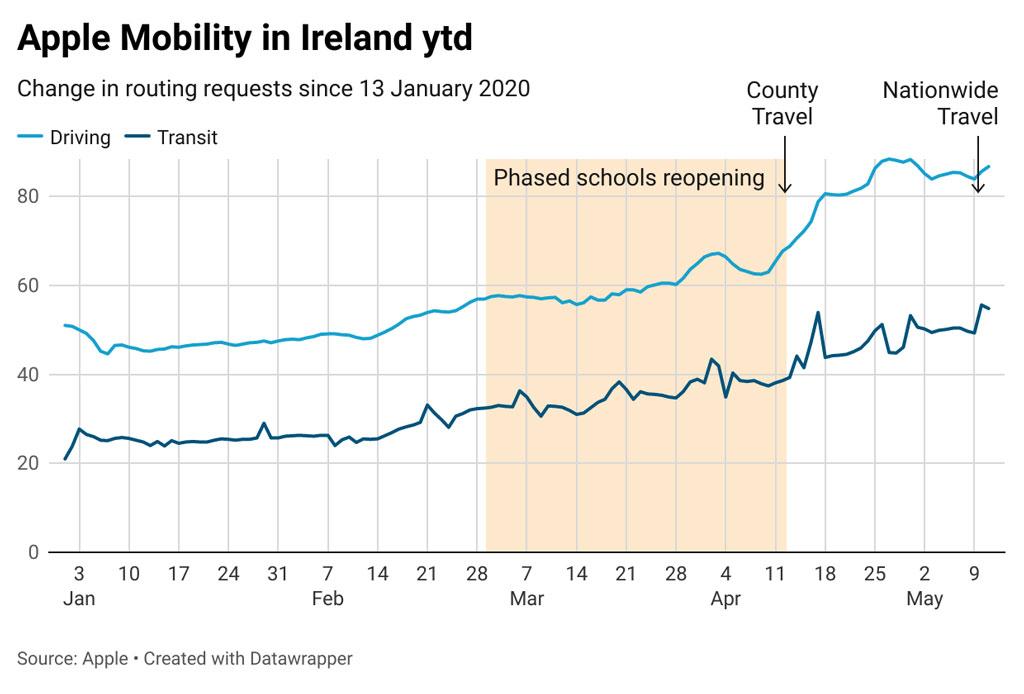 Public transport volumes have more than doubled to the start of the year to reach 55% of baseline. The resumption of full timetables and a doubling of capacity should be reflected in further increases in the coming weeks.

This week has again seen the highest levels of traffic congestion in 2021 in Dublin, according to TomTom’s Traffic Index with Tuesday’s average of 43% the single highest day of 2021. Congestion that day peaked at 89% at 9am and then at 63% at 4pm.

Congestion levels averaged at 45% for the first four days of this week, up from 27% for the same days in March and 35% in April. This means that a 30-minute trip during peak hours takes 13.5 minutes longer than it would during uncongested conditions.

The TII is reporting that traffic volumes are now 3% above levels experienced before the introduction of Level 3 restrictions in October of last year with what they describe as ‘significant’ weekly increases.

Thursday’s totals from the sample of ten traffic counters located on the national road network for the morning period from 7am until 10am give the following comparisons: 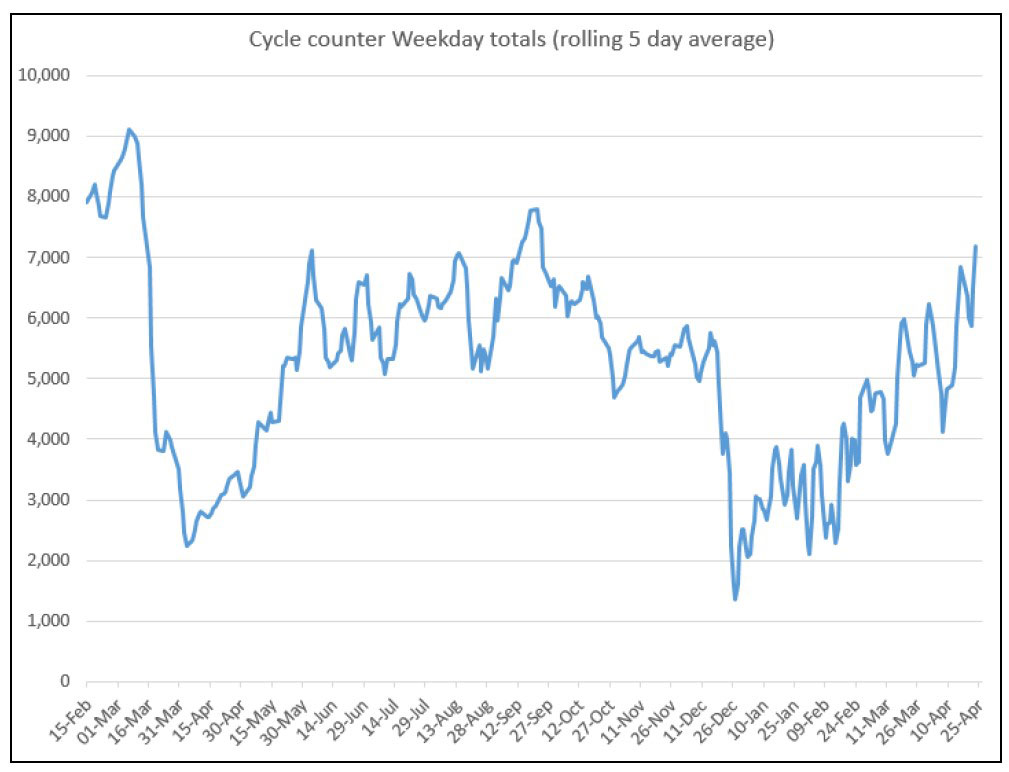 Overall consumer spending was up 3% on March and April 30th recorded the highest level of spending for the month, with a bump in consumer confidence the day after the government announced easing plans and dates.

The confirmation of dates and plans for resuming inter-county travel and the return of the hospitality sector prompted a 30% jump in spending on hotels in April. The bank’s spend report revealed the highest increase in hotel spend came from those under the age of 25 (up 38%). 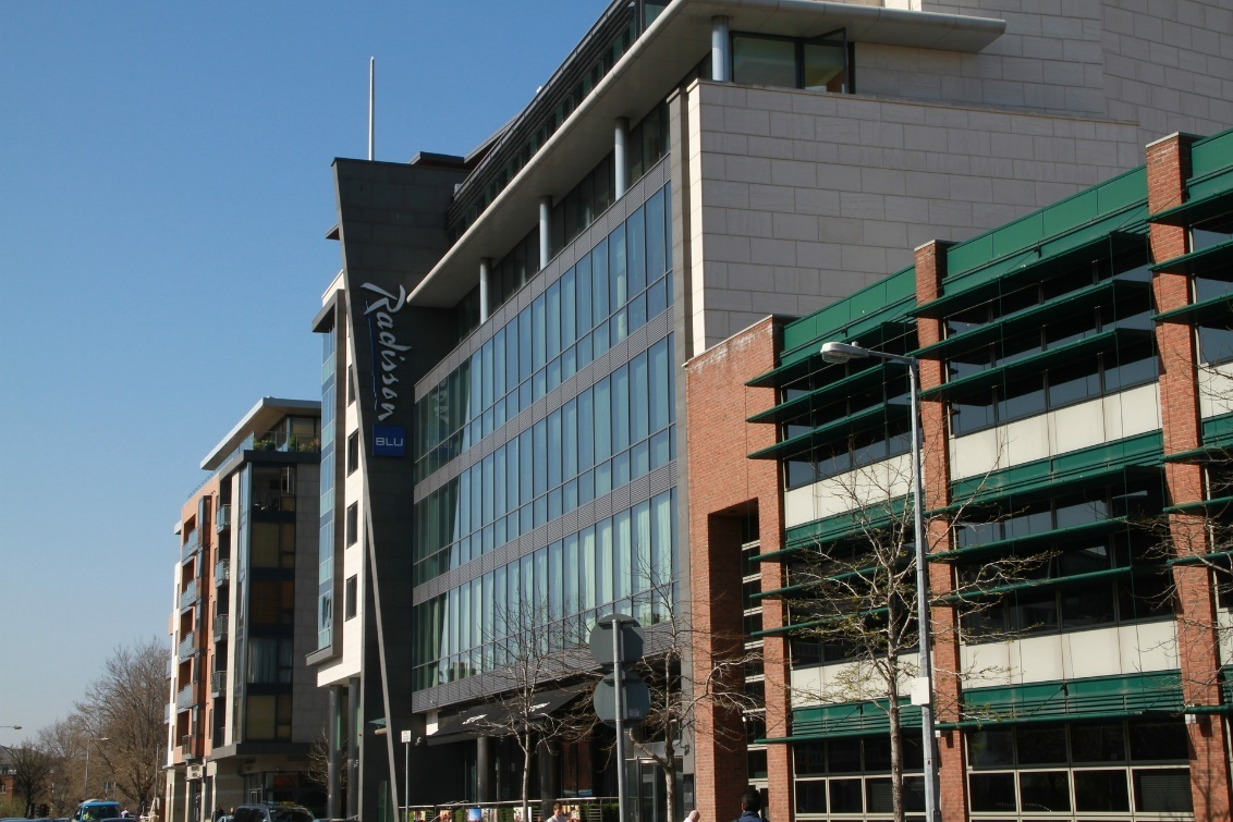 With the possibility of international travel later on this year, the over 65’s will be making the most of their post-vaccinated freedom, as this age group recorded the biggest increase in airline spending, increasing by 25% on March.

During April, consumer spending was up in other hospitality sectors too. As people took advantage of the good weather and takeaway services, spending in pubs and off-licences increased by 35% while restaurant spending saw a jump of 9%.

The biggest increase in spending in this sector was from those in Kilkenny, followed by those in Laois.

With a significant amount of businesses and retailers opening again this week and next, the pent-up consumer demand is palpable. 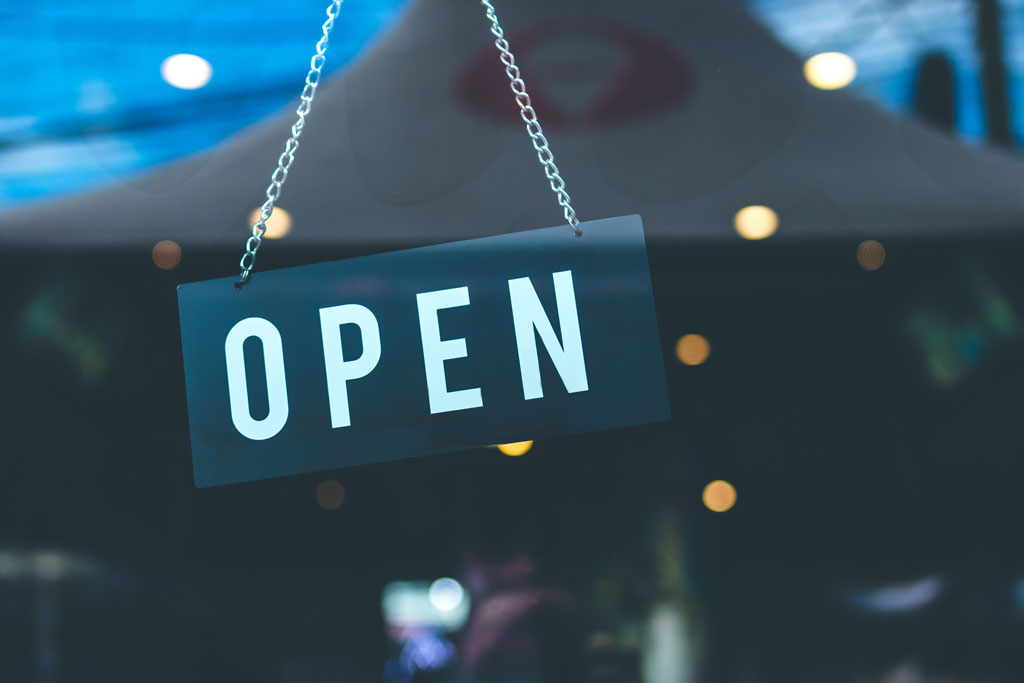 Fintech company Revolut released spending data figures for the country on the first day of the reopening.  Spending in hairdressers and Penneys were huge features of Monday’s reopening, as consumers went on a spending spree after months of lockdown, fuelled by pandemic savings.

The spending data revealed Revolut users were spending €768 per minute in hairdressers, barbers and salons.

Many retailers resumed click and collect services and shopping by appointment this week ahead of a full reopening of non-essential retail next week. The figures showed the retailers that saw the most spending were Penneys, JD Sports, Brown Thomas, Zara and Argos. 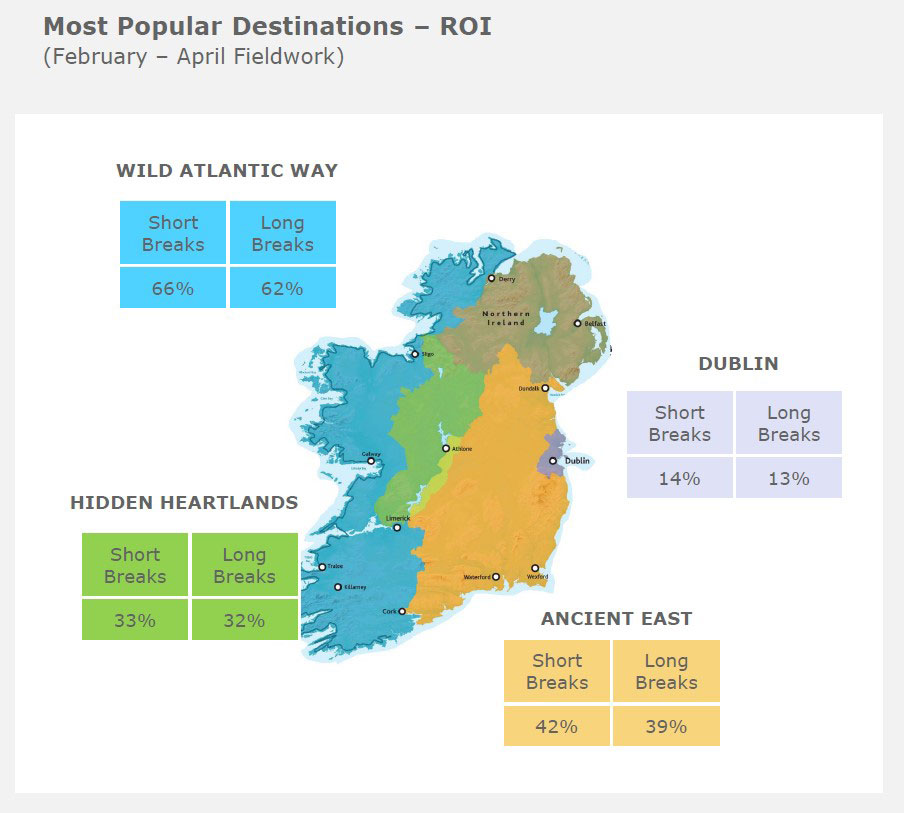 It finds that 48% of consumers intend to take either a short or long break in the Republic of Ireland within the next 6 months; 30% intend on domestic travel exclusively, with the remaining 18% intending to take a combination of both domestic and international travel.

As regarded intended staycation destinations, coastal counties dominate the most popular destinations for both short and long breaks. As expected, the Wild Atlantic Way represents a significant share of this, with 66% of those intending on taking a short break due to visit the region within the next 12 months (62% for long breaks).

As a major population centre, Dublin attracts high intentions to visit friends and relatives (VFR), with 40% of trips falling into this category. The counties of Ireland’s Hidden Heartlands appeal to 33% of intended short trip takers (32% long breaks).

Deloitte’s Global State of the Consumer Tracker captures a continual snapshot of worldwide consumer sentiment. In its latest release it reports that 45% of Irish 18-34s planning to stay in a hotel in the next three months with the same number looking at private accommodation for leisure breaks. 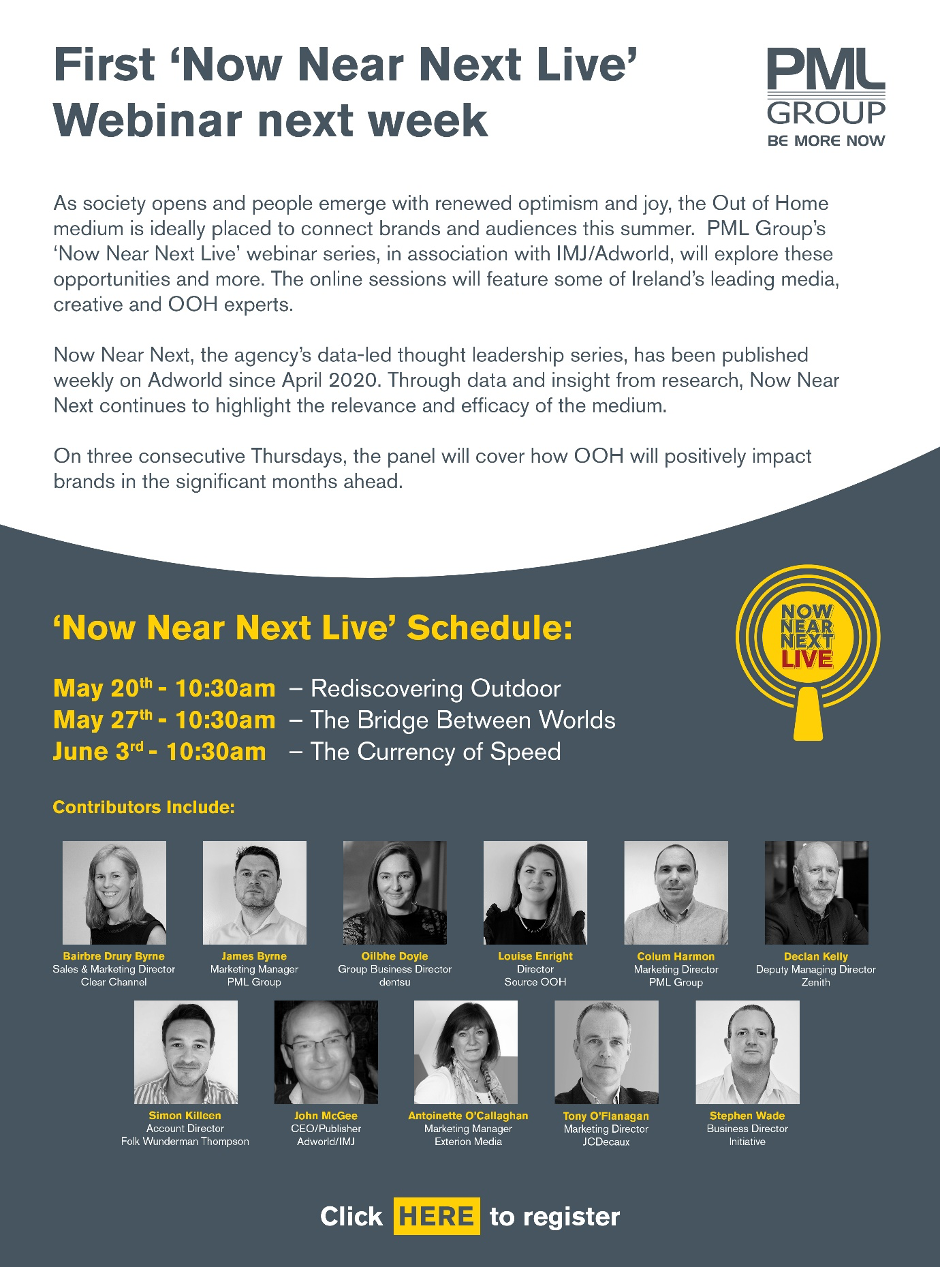