Nearly one in three Irish people have now received a first dose of the Covid-19 jab. As The Path Ahead roadmap comes into effect, this week saw the full resumption of public transport timetables and the construction sector.

From this Monday, May 10th, people will be allowed to travel across the country. On the same day hairdressers, barbers, and beauticians, along with libraries, museums, galleries and other cultural attractions will all reopen. Click-and-collect for non-essential retail will also resume and some retailers such as Brown Thomas and Penneys will be operating shopping by appointment ahead of retail’s full reopening. Up to 50 people will be allowed to attend religious services, including weddings and funerals. Outdoor gatherings will be possible for up to 15 people while full retail will resume on 17th May. In short, Outdoor’s audience grows by the day and what we’ve spoken of as future milestones are becoming today’s reality. 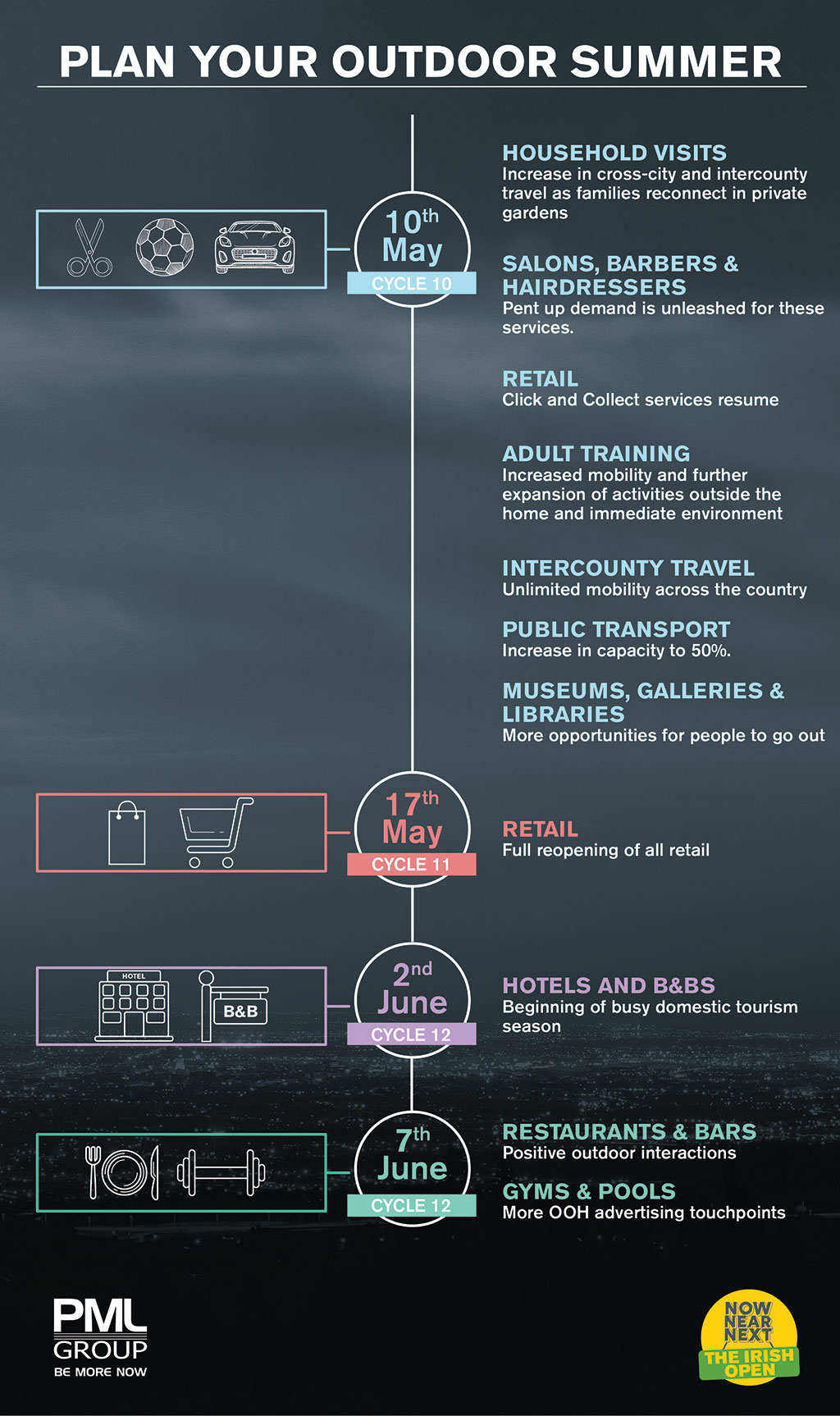 Google’s COVID-19 Community Mobility Report illustrates the move to out of home environments from the start of the year. Duration spent at home has declined from +22% to +10% while visits to supermarkets and pharmacies has increased from -19% to +14%. A major increase in workplaces and other retail environments with the easing of restrictions in the coming weeks. 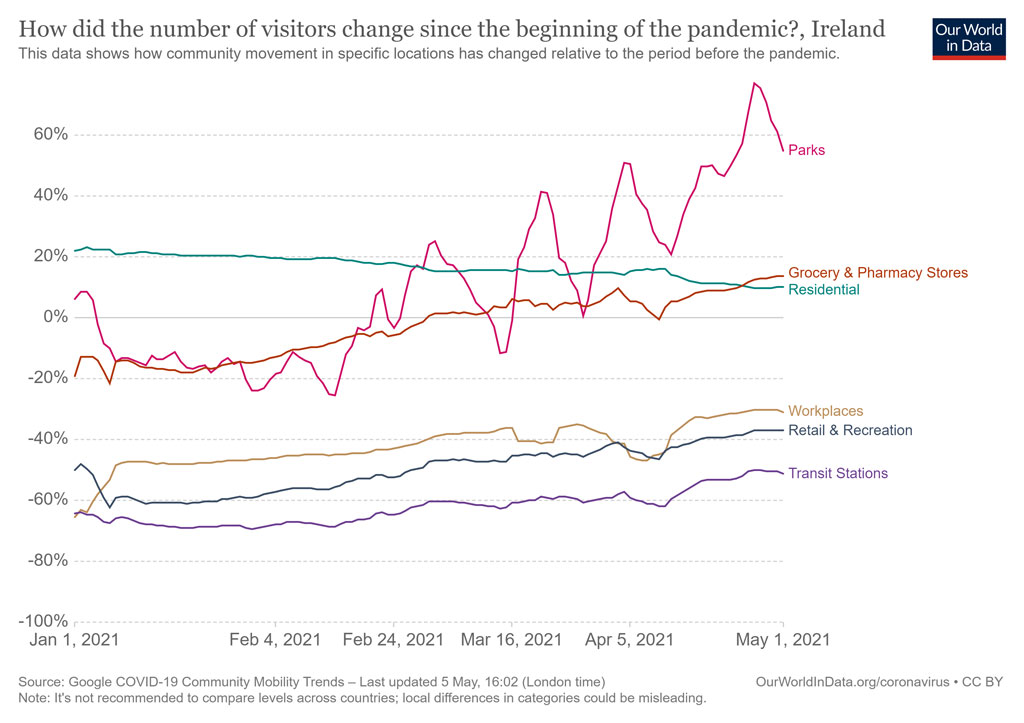 The seven-day average for Apple’s routing requests mobility data to Friday 1st May reports traffic has recovered to 88% of last year’s pre-pandemic baseline. The resumption of inter-county travel from next week should see traffic levels approach baseline. 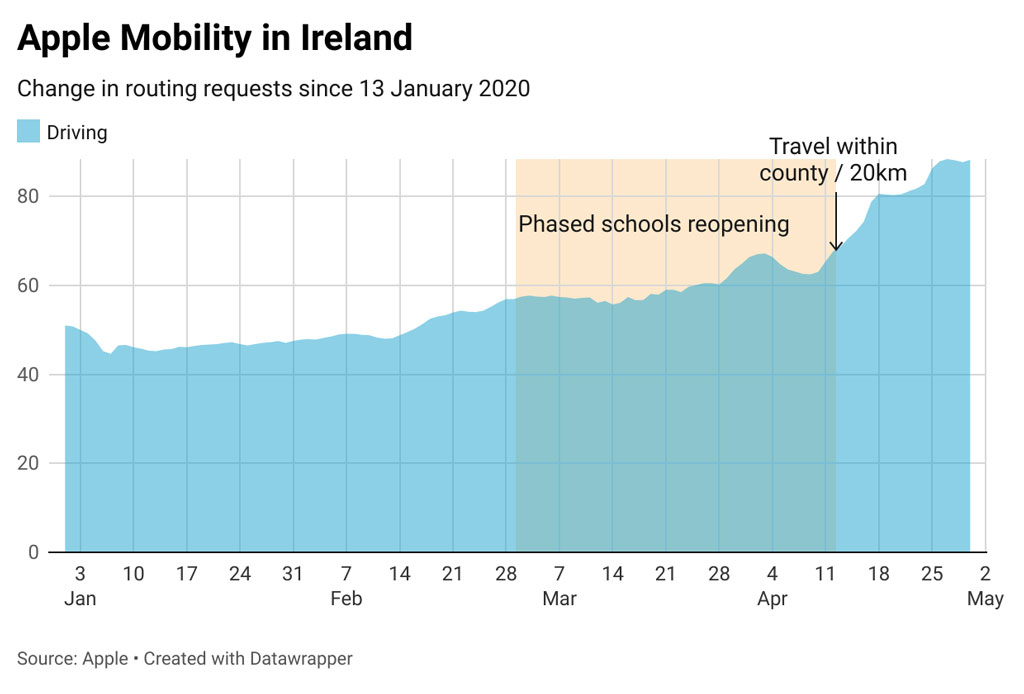 Context is the central creative force for many returning OOH advertisers in recent weeks. The context of time, of mood, or of the world that society is re-emerging into are brilliantly captured by an array of advertisers from a wide range of categories. And these context-driven messages are being delivered by a much broader range of OOH formats and environments than we’ve seen in 2021 so far. Brands are now honing in on the reality of an outdoor summer like we’ve never seen before.

Cadbury are focusing on the importance of garden entertaining this summer, using OOH to amplify its ‘Ultimate Garden Set Up’ promotion. The call to action via mobile is a nod to OOH’s ability to drive response and urgent action among consumers. The BBQ is of course a staple of garden entertaining, weather permitting, (or not as the case may be!) and Centra are certainly on the ball with an official declaration of summer alongside enticing food photography. The large scale, visual aspect to OOH lends itself perfectly to such an approach and the roll out on roadside formats as well as at Centra stores means mental availability is built in consumers over time with reminders at time of purchase. 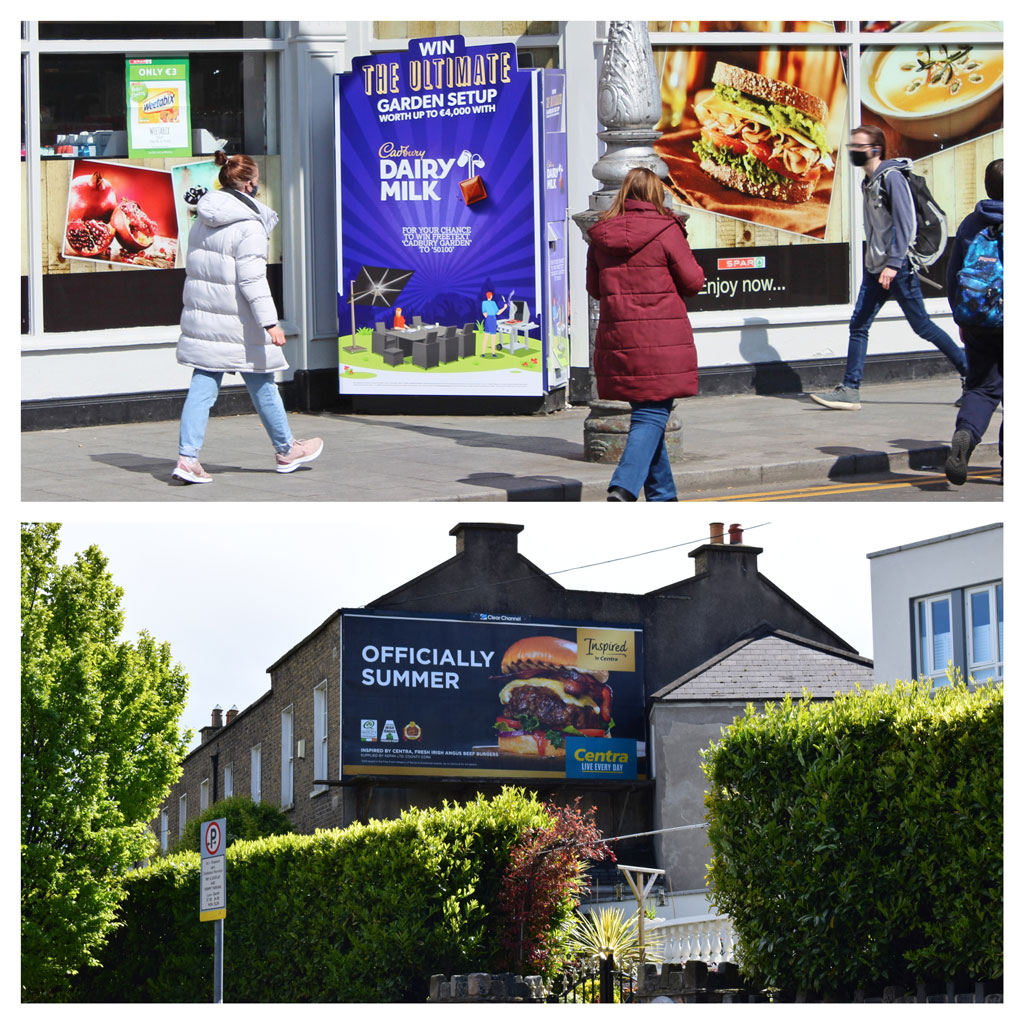 The Leaving Certificate will preoccupy many a household in the coming weeks and Denny are tapping into the stress the state exams can bring, in a humorous way, to trigger memories among decision makers in these households. INM also have an eye on the outdoors with the imagery on their T-Side campaign that ran in cycle 9. Full bus timetables and an increasing movement of people that share the roads with these massive, mobile, ad canvasses are putting buses back on the agenda again for brands. Finally, great work from Vodafone who are looking to a post-Covid future and using OOH to showcase how their services will accommodate some longer-term changes in our lives. 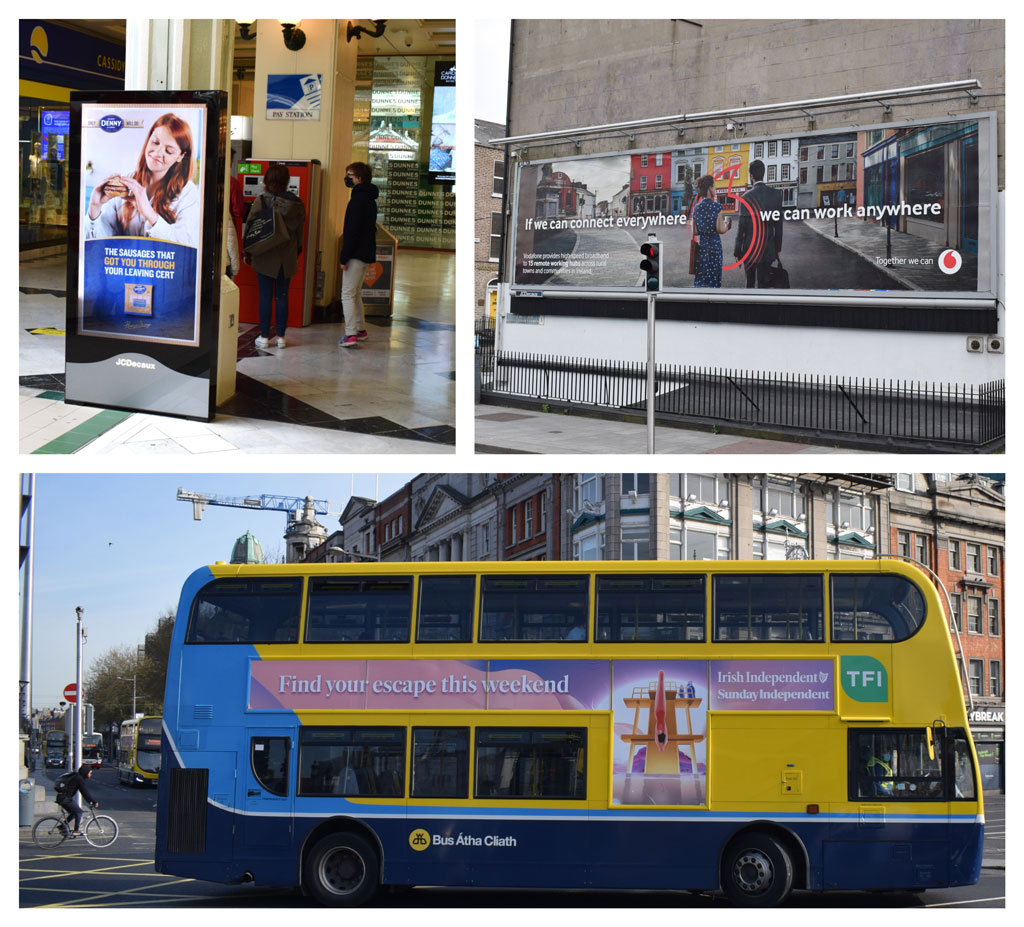 These are a just some examples – Media, Telecoms, Food, Retail, Confectionery – of using context on OOH to drive differing strategic agendas. Outdoor’s A-Game combination of audience, location and message is back to the fore.

Trips to the supermarket are on the rise according to Kantar’s latest grocery market analysis.

The figures show Irish shoppers visited the supermarket an additional 3,992,538 times in the past four weeks compared with this time last year, the most shopping trips in a month since March 2020.

With the vaccine roll-out progressing, the over 65s are leading the return with their visits to physical stores up by 13.7% compared to last year, and ahead of the national rate of 8.9%.

With Easter at the start of the month, sales of Easter eggs jumped by 17.4% compared to 2020 and sales of premium eggs increased by 21.7%.  Consumer also spent an extra €5.5m on roast beef and €6.5m on vegetables over Easter.

Looking at the yearly comparison, sales declined by 3.3.%, however this comparison is shaped by the bigger shopping trips that generated record sales last year as we prepared for the first national lockdown.  The data also shows that the grocery market growth in Ireland slowed to 1.9%, during the last 12-week period.

Commenting on this, Emer Healy, retail analyst at Kantar said “Growth may have dipped year on year in April, but we’re still some way from normal and take-home grocery spending remains an incredible 19.4% higher than pre-pandemic levels. With restrictions still firmly in place and most of us eating all our meals at home, the average household grocery bill was €245.10 higher in past 12 weeks than in 2019.”

In the 12 weeks ending 18 April, SuperValu continued to hold the largest market share at 22.5%, its highest since June 2020. 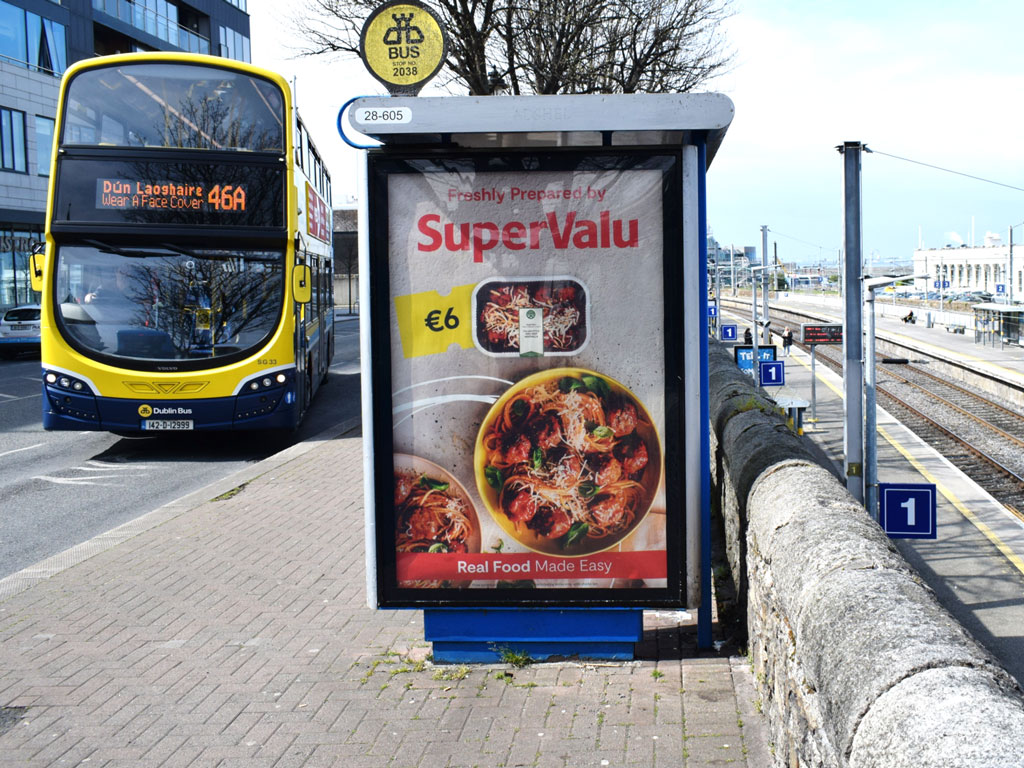 Tesco’s sales increased by 2% as the grocer attracted new customers to boost sales by €1.1 million, its share of the market now stands at 21.7%. Dunnes Stores accounted for 21.1% of market share during the period.

Lidl was the fastest growing retailer in the 12-week period, boosted by people making extra, smaller shops. Basket-sized trips increased by 8.8% year on year at the retailer. Aldi holds a market share of 12%.

Deloitte’s Global State of the Consumer Tracker regularly surveys thousands of consumers in more than 15 countries, capturing a continual snapshot of worldwide consumer sentiment. The latest wave conducted on 28th April finds Irish consumers’ safety concerns have eased over the past month.

According to the most recent figures, consumers are keen to return to in-person activities. The tracker recorded increases in consumer confidence in visiting physical stores (up 6%), engaging in person-to-person services (up 9%), going to a restaurant (up 6%) and attending in-person events (up 1%). 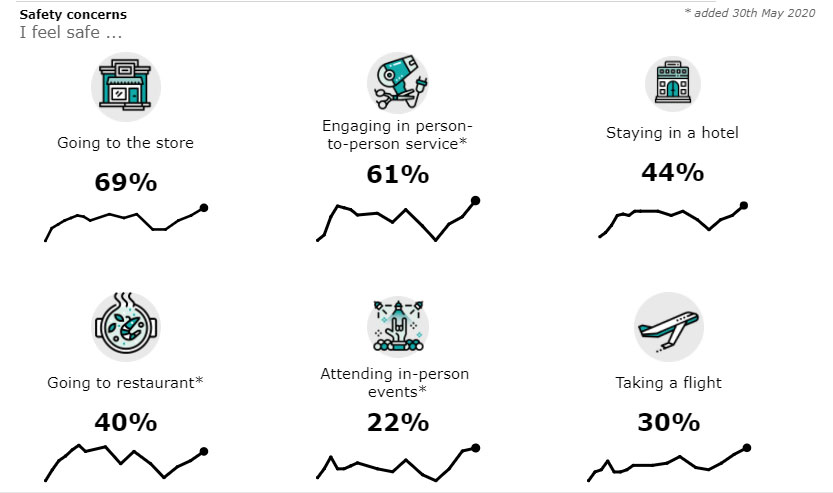 Pedestrian Scheme Begins to Pave the Way for an Outdoor Summer

As reported in a previous Now Near Next edition, work is now under way to pedestrianise key city centre streets to help facilitate outdoor dining this summer.

From Monday 24th May, several streets around the Grafton Street area will either be traffic-free or have sections of them traffic-free daily after 11am. These include South Anne Street, South William Street, Drury Street and Dame Court. 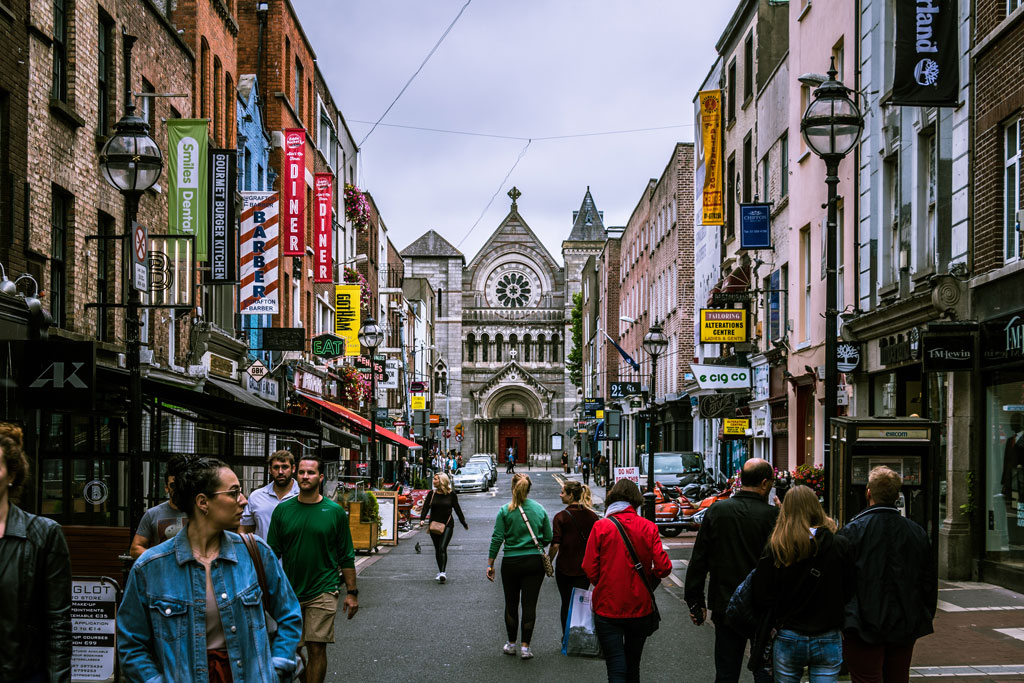 New traffic arrangements are also to be put into place along Merrion Row to trial the feasibility of a pedestrian space to allow for outdoor dining. The trail will take place from 6am on Saturday May 15 and continue through to 11pm on Sunday May 16. In a statement, DCC said “If the trial is successful a design can then be finalised, taking into account feedback from the recent consultation, which would allow for accessible footpath extensions on both sides of Merrion Row to facilitate outdoor dining this summer.”

More streets are expected to follow with the council stating it is working on plans to increase pedestrian and dining space in other parts of the city. Temple Bar businesses are preparing to submit a proposal to the council which would facilitate up to 3,000 diners on the streets in the cultural quarter.

And, finally……..PML Group Launches ‘Now Near Next Live’ Webinar Series

As society opens and people emerge with renewed optimism and joy, the Out of Home medium is ideally placed to connect brands and audiences this summer.  PML Group’s ‘Now Near Next Live’ webinar series, in association with IMJ/Adworld, will explore these opportunities and more. The online sessions will feature some of Ireland’s leading media, creative and OOH experts.

Now Near Next, the agency’s data-led thought leadership series, has been published weekly on Adworld since April 2020. Through data and insight from research, Now Near Next continues to highlight the relevance and efficacy of the medium.

On three consecutive Thursdays, a different panel will cover how OOH will positively impact brands in the significant months ahead.

Now Near Next Live Schedule

Register for the sessions HERE