With the country still in lockdown, Brennans Bread and GroupM agency Mindshare have rolled out a  new social media campaign that aims to inject some positivity and community spirit by encouraging people to “Raise a Toast” to a loved one during the Covid-19 crisis.

“Raise a Toast” is the third campaign in a series of media activations by Brennans Bread aimed at keeping communities’ spirits high, and positivity levels up during these challenging times. This campaign began as a social activation on the Brennans Bread Facebook page where the audience could share their messages. A select number of participants have been given the opportunity to create their dedicated video which will be aired on RTE One.

Each video will run on RTÉ during a 2:30-minute ad break across four days at 5:20 pm each day during the Today Show. With each video created, Brennans will also make a donation to charity in the winner’s name. As an extension to the campaign, Brennans have taken a segment out on the Today Show where the presenters will also “Raise a Toast” to their loved ones.

The “Raise a Toast” campaign began April 24th on Brennans Bread Facebook page with the audience’s messages running on air on RTÉ from April 30th. 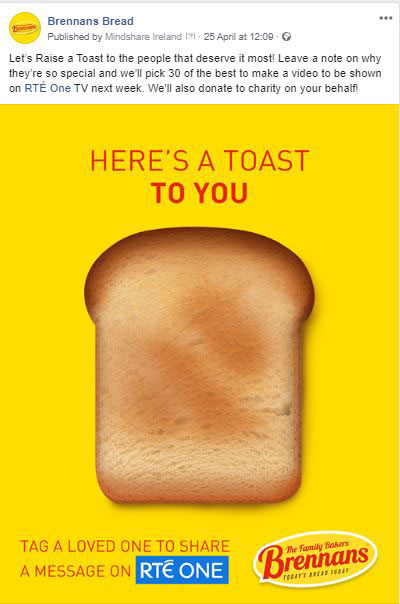 According to Ivan Hammond, head of marketing, Brennans Bread: “Brennans want to make our small contribution to the households of Ireland during these challenging times. We above all else, would like to share positivity in the community and we also wanted to let the people of Ireland share their own support of their loved ones with this campaign. We hope it brings a smile to the consumers faces with some of the fantastic people who have sent in their “toast to” stories.

David Ahlstrom, Mindshare’s head of invention and chief creative officer adds: “As a brand that reaches the length and breadth of Ireland, we’re delighted that we can bring something back to our avid community during these difficult times. Creating meaningful connections for our audience through national television is something that we are really proud of, and we hope it brings some positivity to the communities of Ireland.”

Gavin McAuliffe, Creative Services, RTE says: “Brennan’s has demonstrated how to use long form TV ads in a really relevant and innovative way, we are delighted to have been part of helping deliver such an agile and topical creative solution.”