Ebow The Digital Agency created the campaign OctoberQuest as their was particular opportunity in addressing people already warm to the idea of quitting. They had probably engaged with other Quit campaigns in the past on New Year’s Day or Ash Wednesday. If, however they didn’t succeed on those target days for giving up they took this as a failure and possibly felt that that they had permission to abandon the effort until the ‘next time’.

“We wanted to take away this permission to give up on quitting because the Quit day has passed, and instead present October as OctoberQuest, a month which offers up a series of opportunities to achieve their goal.” 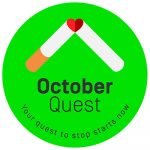