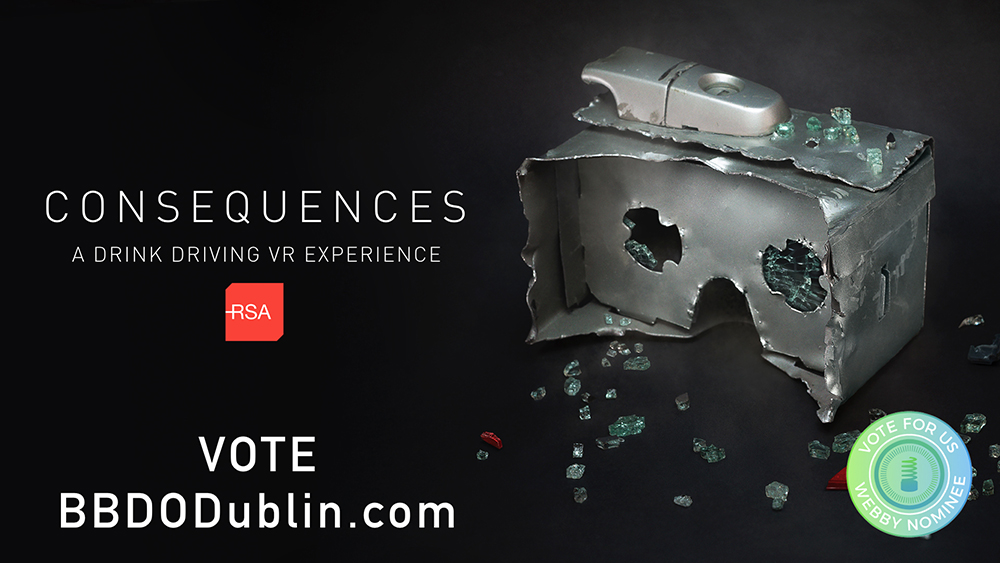 BBDO Dublin has been nominated in the  Best 360 Video (Branded) category in the Annual Webby Awards which will take place in two weeks time in New York.

The agency has been nominated for “Consequences”, a virtual reality production that puts the users in the shoes of a drink driver. With four unique storylines, participants experience the full extent of the agonising consequences of drink driving – from injury to prosecution. Shot in 6K with 3D audio, it is a deeply immersive experience, and with over 135,000 views and counting on the RSA Shuttle bus travelling across the country.

“Nominees like BBDO DUBLIN are setting the standard for innovation and creativity on the Internet,” said Claire Graves, Executive Director of The Webby Awards. “It is an incredible achievement to be selected among the best from the 13,000 entries we received this year.”

“Drink driving could change your life in an instant and our Virtual Reality series brings that reality home in chilling detail,” said Neal Davies, CEO, BBDO Dublin. “The use of new and emerging technology to spread vital road safety messages is a key tool in changing behaviour and as such we are truly honoured to be nominated by The Webby Awards and to be recognised as having created one of the five best Branded 360-Video campaigns in the world.”

Winners will be announced on Tuesday, April 23, 2019, and honoured at a ceremony on Monday, May 13 at Cipriani on Wall Street in New York City.

As a nominee, BBDO DUBLIN are also eligible to win a Webby People’s Voice Award, which is voted online by fans across the globe. From now until April 18th, Irish voters can cast their votes in support of this ground breaking campaign at wbby.co/vote-vid60

It was also good news for Boys and Girls which was nominated in the Branded Entertainment category for #MadebyMusic campaign for Three featuring Kormac. Vote for them here: https://vote.webbyawards.com/PublicVoting#/2019/video/branded-entertainment/music