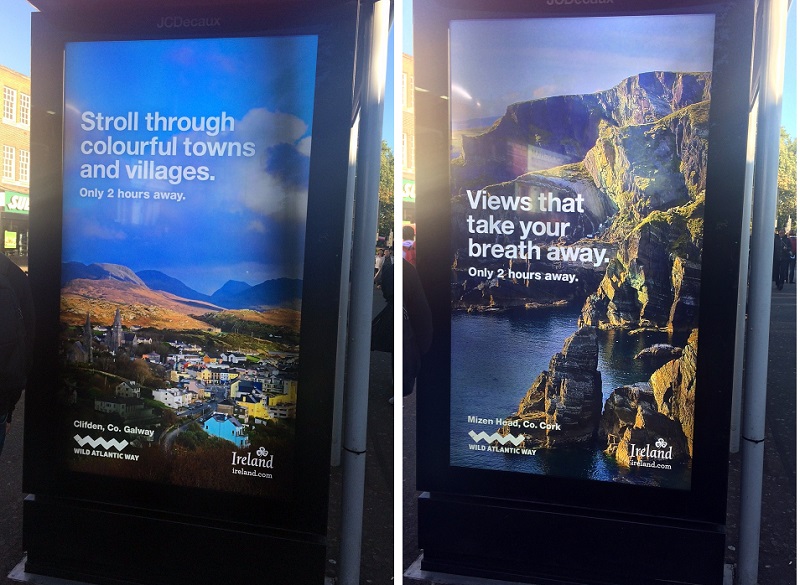 Phase two of Tourism Ireland’s ‘Wonders of the Wild Atlantic’ campaign is rolling out in Britain during September and October, to encourage ‘Culturally Curious’ travellers to take a short break along the Wild Atlantic Way during the off-season months.

The campaign is highlighting ease of access from London, Manchester, Birmingham, Glasgow and Edinburgh – which all have direct flights to the West of Ireland. The campaign includes outdoor ads (on city streets and along commuter routes), sponsorship of Bill Turnbull’s weekend show on Classic FM, email marketing, as well as extensive publicity and social media activity.

Julie Wakley, Tourism Ireland’s Head of Britain, said: “As our nearest neighbour and one of our top markets for overseas tourism, Britain remains a priority for Tourism Ireland. Our ‘Wonders of the Wild Atlantic Way’ campaign is highlighting all the great things to see and do along the Wild Atlantic Way, to encourage British holidaymakers to come and visit over the coming months.”

Great Britain is a vital market for tourism to the island of Ireland. It delivers 47% of all overseas visitors and around 30% of all overseas tourism revenue. Its contribution to the regional tourism economy and to season extension objectives are also significant, with 41% of British visitors arriving between October and March.

Phase one of Tourism Ireland’s ‘Wonders of the Wild Atlantic’ campaign was undertaken this spring.