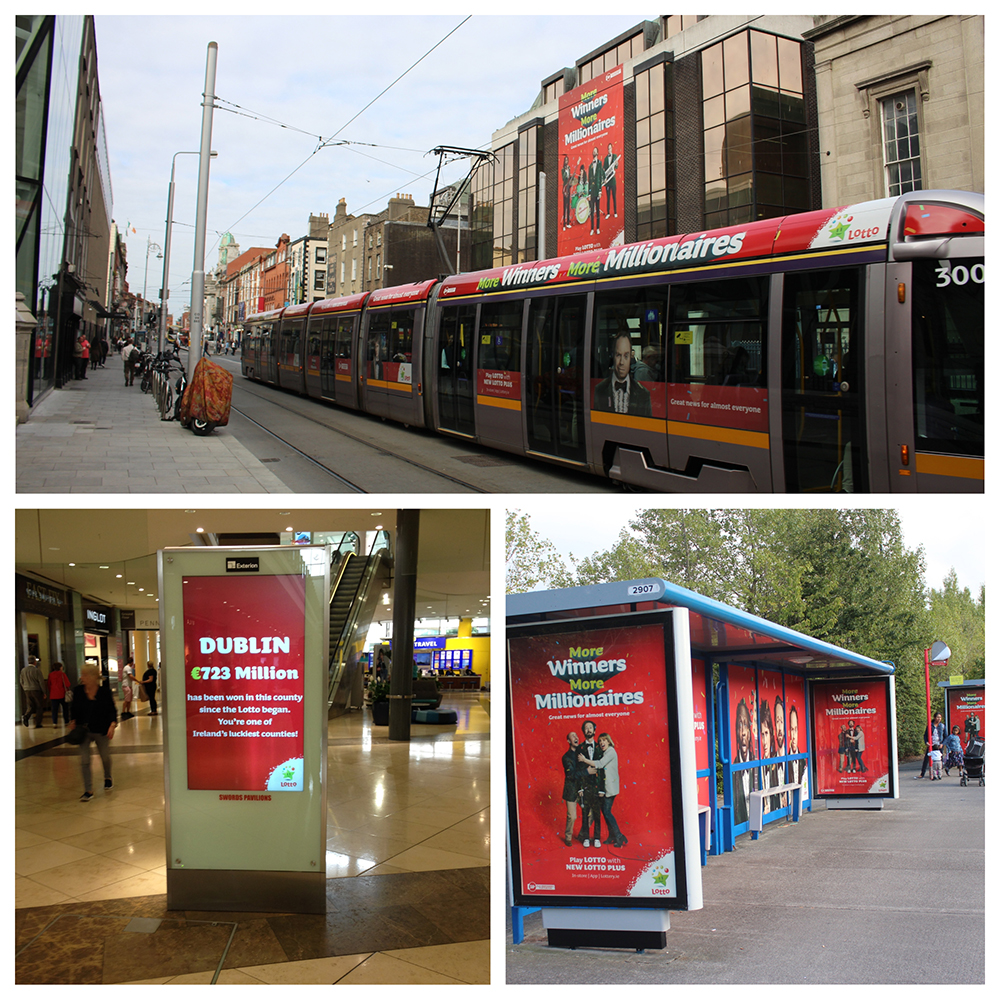 As part of its nationwide campaign to promote the new Lotto Plus game, the National Lottery is running an ambitious and innovative multi-channel OOH campaign that is fueled by data.

Incorporating classic OOH formats alongside dynamic digital screens, the campaign seeks to build awareness of increases in prizes, winners and, of course, millionaires, with the relaunched game. The campaign also aims to connect with consumers at a local level, reminding them of the nationwide spread of winners.

To achieve these goals, the Lottery joined forces with Starcom, Rothco and PML Group. Classic OOH such as large format, 6 Sheets and transport delivered coverage and heightened awareness.  In addition, an innovative OOH spin was put on the Abbey Street LUAS stop, branding the station signage. A wrapped LUAS tram added to the sense of occasion. In addition, Adbikes and a building banner enhanced the interest and excitement around Lottery HQ on the day of launch. Five Adshel vinyl wraps also complemented the campaign.

Data on past Lotto winnings were ingested into PML Group’s Dynamic platform and fused with the OOH agency’s own Pinpoint mapping data to deliver location-specific copy by county. Historic Lotto winnings by location were displayed at relevant point of sale outlets, reminding consumers of the enormous amounts won in their locality since the Lotto began, with Louth revealed as Ireland’s luckiest county. The Dynamic content ran across multiple media owner platforms including dPod, iVision, Orbscreen and Tesco Live and was managed centrally by PML Group’s Dynamic content management system.

According to Scott Molloy, Account Manager, Source out of home, part of PML Group: “This contemporary mix of classic, digital and contextually relevant Dynamic content is a potent combination for delivering on our client’s objectives. We were delighted to bring our agency’s skills to bear in producing a highly engaging, relevant and fun campaign.”

Jennifer Crowe, National Lottery Marketing Manager adds: “This is an exciting time for Lotto with not only the new game change to Lotto Plus guaranteeing more winners and more millionaires, but also the big reveal of the hardest working band in Ireland, the Lotto house band ‘The Celebrations’.  OOH and in particular the dynamic DOOH formats have propelled the campaign idea and brought it to life ensuring the overarching campaign message of More Winners and More Millionaires is delivered effectively to every county in Ireland.”

Opinion: Pitch with Simpático Can Lead to Success

Opinion: Pitch with Simpático Can Lead to Success