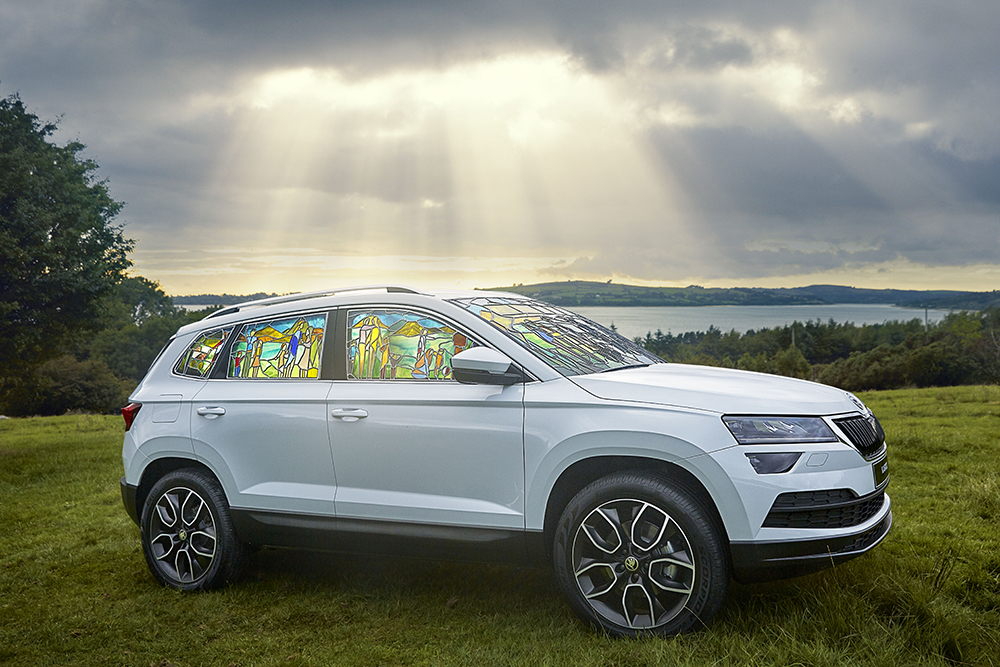 As the official car partner of the World Meeting of Families which was held in Ireland ( August 22nd-25th August) and marks the first visit of Pope Francis to the country, ŠKODA Ireland wanted to create an iconic symbol of this momentous event. They turned to their award-winning creative agency, Boys + Girls with a brief to develop an imaginative idea that captured the essence of Ireland in 2018.

The result is a world-first: a car with beautiful bespoke stained-glass windows commissioned by Boys + Girls from Evan Connon, the famous stained glass craftsman.  Each window of a ŠKODA KAROQ has been carefully replaced with Evan’s work and the car will be on prominent display at the RDS for the duration of the event.

With so many changes in Ireland since the last Papal Visit almost 40 years ago and the idea of the traditional family broadening and becoming more diverse, all types of Irish families are reflected in the eight eye-catching glass designs featured on the car.

Rory Hamilton, partner and Executive Creative Director, Boys + Girls said: “The windows of the stained glass ŠKODA KAROQ tell the story of modern Ireland’s families with different types, races and sex orientation being represented and set against a beautifully depicted Irish landscape of hills, lakes, sea and trees. In addition, the windscreen reads “Celebrating The Irish Family” which reinforces SKODA’s ‘Made for Ireland’ positioning. Since ŠKODA is the perfect car for the modern family, and stained glass is such an integral part of the visual language of the Catholic church, a fusion of both is a perfect example of the story we want to tell.”

Boys + Girls also created a short film which shows the making of the bespoke stained glass windows which it unveiled at the  World Meeting of Families.